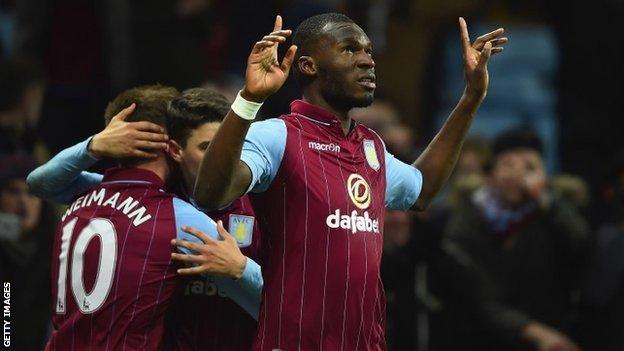 Christian Benteke scored from the penalty spot deep into injury time to give Tim Sherwood his first win as Aston Villa manager and lift them out of the Premier League relegation zone.

Saido Berahino's 18th goal of the season looked to have extended Villa's run without victory to 13 league games after he equalised Gabriel Agbonlahor's first-half goal.

But with only seconds remaining, West Brom keeper Ben Foster capped a performance riddled with uncertainty by fumbling a clearance then rushing out to bring down Matthew Lowton.

Benteke kept his cool to slide in the spot-kick in front an ecstatic Holte End to give Villa three points for the first time since 7 December.

Sherwood celebrated wildly with his backroom staff as the first of the six wins he says Villa need to stay up was secured - thanks in large part to Foster's poor handling and a rush of blood with the game almost over.

The former England midfielder will have been delighted by a vibrant first-half performance that was an example of the "front foot football" he is demanding, but Villa went off the boil after the break and needed that dramatic conclusion to get the win.

Sherwood will hope it not only provides the momentum required in the run-in but also a psychological lift ahead of the FA Cup quarter-final between these two teams at Villa Park on Saturday.

Albion's in-form attacking partnership of Brown Ideye and Berahino were declared fit - but were virtual spectators and starved of supply as Villa dominated the first half.

In contrast, Villa used the pace of Agbonlahor and the power of Benteke to great effect, the pair combining as they took a lead they fully deserved after 22 minutes.

Benteke flicked on keeper Brad Guzan's clearance for Agbonlahor to outpace Joleon Lescott and roll a finish under Foster.

Agbonlahor thought he had put Villa ahead earlier when Foster fumbled a routine shot, but goal-line technology confirmed West Brom's keeper had scrambled back just in time to grab the ball as it rolled towards goal.

And Foster needed the help of Lescott to salvage another desperate situation when the defender raced back to clear off the line after Albion's defence had again been exposed by the pace of Agbonlahor.

Villa's only frustration was that they had failed to increase their lead and they were denied by the woodwork in first-half stoppage time when Delph's precise shot from 20 yards bounced off the outside of the post to safety.

It was safe to assume manager Tony Pulis would have had harsh words with his players after a dreadful first-half performance and they were almost on terms early in the second half when Craig Dawson should have done better than miss the target from seven yards after meeting Chris Brunt's perfect free-kick.

Villa did not heed the warning signs and another super delivery from Brunt yielded the equaliser in the 66th minute, his dangerous corner being met at the far post by Lescott and Berahino reacting instinctively in a packed six-yard box to head past Guzan.

The Baggies' equaliser shook Villa and tensions almost boiled over when Berahino and Alan Hutton squared up following a nasty challenge from the latter, who escaped with just a booking.

Amid the nerves and frustration at Villa Park it looked like Pulis's side had earned a draw until those final few seconds and Benteke's decisive penalty.