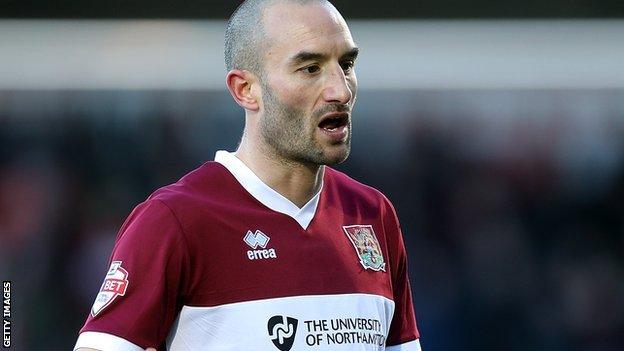 Town were soon behind when Chris Hackett's low, right-foot shot crept inside the post.

The Cobblers doubled their lead when Ricky Holmes curled a free-kick into the path of Joel Byrom, who rifled in.

Micky Demetriou headed in Bobby Grant's corner late on to ensure a tense finish, but the visitors held on.

Having previously won 13 and drawn three times in front of their own fans, Shrewsbury went into the game boasting the only unbeaten home record in the Football League.

But they remain second in the table, three points behind leaders Burton, who also lost at home, while Northampton climb to 10th, six points outside the play-off places.

"We have to give Northampton great credit for putting in that type of performance here. We can't afford to give ourselves too much to do. Our side will always fight back, but we ran out time to get level.

"We've put the lads on in the second half and made it really difficult for them. We've had chances near the end to get level and got ourselves in good positions.

"It is disappointing to lose our home record at any stage of the season. But we'll dust ourselves down ready for Tuesday. It's good we have a game to move straight onto, but there's no doubt that Accrington will be tough."

"A deserved result. We've had to defend with our lives in the last ten minutes.

"I think we're a dangerous side to play against and we backed ourselves. We didn't come here just to make the numbers up.

"We have to now make sure that on Tuesday night (against Portsmouth) we don't lower our performance levels."