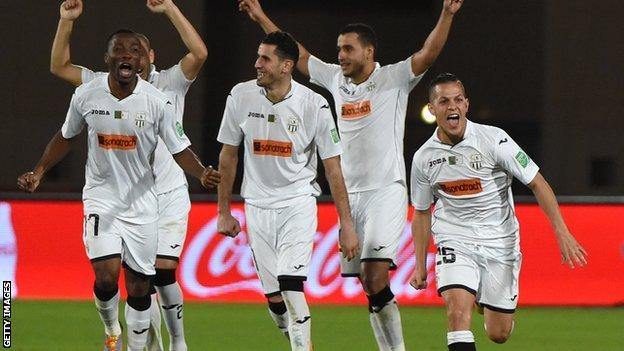 Entente Setif became the first Algerian club to win the African Super Cup, beating Egypt's Al Ahly 6-5 in a tense penalty shoot-out after the match had ended 1-1 in normal time.

The prestigious fixture was played in Blida, 45 kilometres south of Algiers - in front of a strong security presence.

The Confederation Cup holders made it 1-1 through veteran striker Emad Meteb with virtually the last kick of the game, to take the contest to a penalty shoot-out.

The home side eventually won the cup 6-5 on penalties after Ahly's Bassem Ali missed his kick.

Ahly have won the one-off match, played between the winners of the Champions League and the Confederation Cup holders, a record six times.

But Setif went into the game as favourites because the match was staged in Blida, and in the past, home advantage has proved crucial in most of the annual games.

Since the Champions League winners began hosting the fixture in 1996, 17 of the 19 matches have ended in home victories.

Only 1,000 of the 25,000 tickets for the showdown at Stade Mustapha Tchaker, 45 kilometres south of Algiers, went to Ahly supporters.

But it is thought the stadium was far from full, after bad weather made conditions difficult for supporters.

This is a first success for Algeria in a match won nine times by Egyptian clubs. The Super Cup did not exist when the 'Black Eagles' were previously African champions in 1988.

It caps a hugely successful period for the Algerian club.

Champions League success led to Setif being voted Caf Club of the Year, Kheireddine Madoui voted Coach of the Year and El-Hedi Belameiri and Akram Djahnit finishing runners-up in the Africa-based Footballer of the Year.