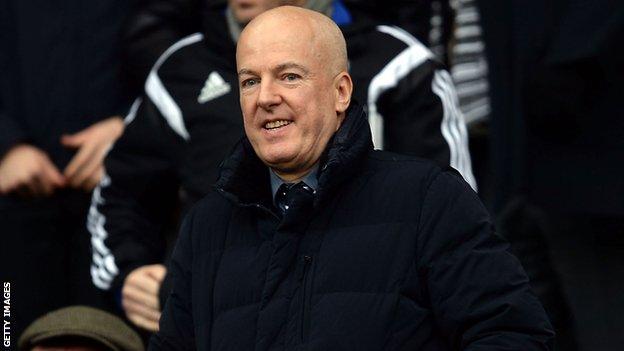 West Brom chairman Jeremy Peace "would be willing to step aside" and sell the Premier League club.

Peace, who owns 77% of the club, has been chairman for 13 years, and said in 2008 he was open to proposals regarding investment in the club.

His stance has not changed and in light of the new TV deal he "feels it right and prudent to present the club to the investment market".

"I have been at the helm for 13 years and I am proud of what has been achieved in that time," he said in a statement.

"I do not need to remind supporters about the journey we have shared to this point.

"I believe it is a sound company - an extremely solid football club with no debt, significant assets, a developing infrastructure and reasons to be confident about the future."

The Baggies currently sit 14th in the Premier League table, four points above the bottom three.

Peace appointed new head coach Tony Pulis on 1 January and the club has lost just one of their nine games since, picking up nine league points and reaching the FA Cup quarter-finals.

"I am happy to continue as we strive to deliver Premier League football whilst growing the club within our means.

"But equally if there was someone out there willing and capable of taking the club further forward, I would be willing to step aside and negotiate a change of ownership providing it was an investment that was right for the club."