"He left us a few months ago but he still brings his dirty washing round," said Arthur Benton, who - along with partner Ann - was Iorfa's landlord during his formative years in the Championship club's academy.

"My washing machine was broken at one point so they were doing [the washing] for a spell," replied Iorfa, 19, with a smile. "I still take it over every now and again. Just my white stuff, so that it doesn't get stained."

Perhaps Arthur and Ann should start stocking up on polish for Iorfa's shiny new trophy. His performances in January earned him the Football League's Young Player of the Month award.

Iorfa started all four league matches in an unbeaten month for Wolves, who conceded just two goals in those games, both coming in a 2-2 draw at Bolton on 31 January.

Clean sheets against Blackburn, Blackpool and Charlton helped Kenny Jackett's side return to play-off contention after a poor run of form, and further cemented Iorfa's first-team place just a month after his Wolves debut. 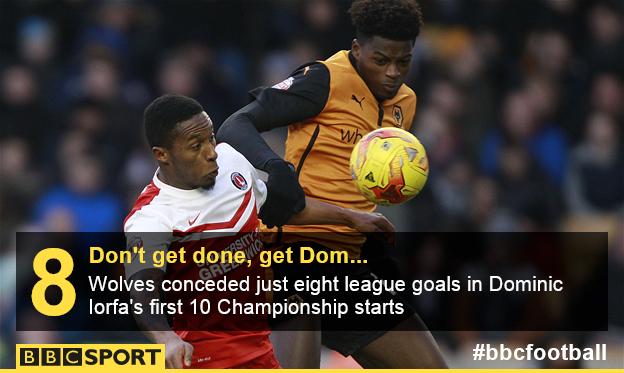 Iorfa told BBC Sport: "I've seen some of the other players that have won it and they are all good young players who have been doing really well.

"For me to be in that list of winners is very good and I'm very happy. It's been a good few months for me and I just want to push on from here."

In an era in which youngsters move across the country and, in some cases, the continent to sign for their chosen team, having a stable environment away from football is crucial to a player's progression.

Iorfa, the son of a former Nigeria international of the same name who played for several English clubs including Queens Park Rangers and Peterborough, grew up in Southend before being spotted by Wolves at the age of 15 and relocating to Wolverhampton.

Any anxiety about leaving Essex so young soon disappeared, and after a few months at another lodging, Iorfa moved to the place he would call "home" for more than two years.

"The club put me with Ann and Arthur and I was with a few other lads from the same youth team," he said. "They looked after me really well and I'm really grateful to them because everything they did for me was to help my football.

"I was 15 or 16 when I moved away and it was something similar to home, which is good and it helps you settle in.

"All the players welcomed me. That helps as well. If I'd gone somewhere I didn't like and I didn't get along with people, it would have been a bit of a struggle, but everyone was really nice and the club has been very good as well."

Wolves head coach Jackett added: "The support system set up in our academy for our young players is very important. It's important at the club, but it is also just as important for when they are away from the club.

"Whether it's family, friends, or the landlords and landladies, the support system in place behind the scenes is vital. At Wolves, this is something that the staff work very hard at, making sure the players are all settled."

A loan spell in League One with Shrewsbury Town last season gave Iorfa his first seven appearances in senior football. "It toughened me up and got me used to what men's football is about," he said.

A four-game losing run prompted Jackett to hand Iorfa his Wolves debut against Bournemouth on 6 December.

On that day, few were more proud than Benton, a long-time Wolves supporter who follows the team home and away.

"This is about the 12th season that we've had kids with us," he said. "The only one that's really made it at Wolves out of all of them is Dom, and he's come on leaps and bounds.

"All of a sudden, he's got in the first team and he looks like he's been there for ages.

"You want him to do well. You are proud, more for them than yourself, because you've seen them develop and you've helped to nurture them. And also, you've got to thank Kenny for giving him a go." 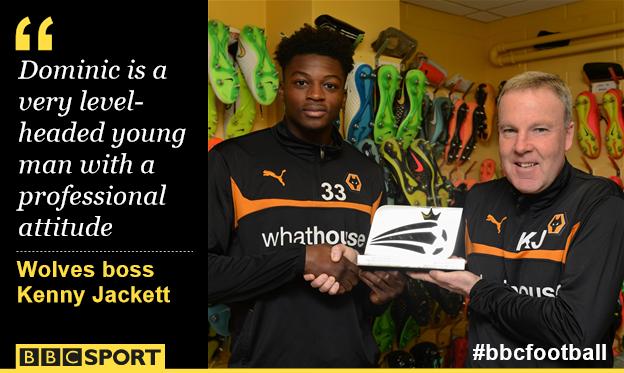 Wolves are proud of their record of developing young players. Robbie Keane and Joleon Lescott are among their previous success stories, and several more have been given their chance at Molineux since Jackett was appointed in the summer of 2013.

Jackett rebuilt his squad, having inherited a group that had suffered consecutive relegations from the Premier League to League One.

Youngsters such as Danny Batth, Jack Price, Lee Evans and Ethan Ebanks-Landell helped Wolves surge to the League One title last season and have pushed them to the brink of the top six this term.

Iorfa and fellow defender Kortney Hause are the latest teenagers to get their chance in the senior side and Jackett remains committed to the policy of promoting youth.

A new state-of-the-art academy facility costing around £7m, which was officially opened late in 2014, should ensure the ex-Millwall boss will continue to have plenty of young talent at his disposal.

"We are a club that produces its own players and we want to carry on doing that," he said. "A lot of people work very hard behind the scenes at developing these players and helping to bring them through.

"When I came into the club, I felt that a new group was needed and that will continue to have to move on - it is very important for us. Giving these younger players the chance and the opportunity to play first-team football is key."

As for Iorfa, who is stunned and delighted that he already has his own terrace chant at Molineux, the aims for the remainder of the season are clear.

"Keep doing well, keep improving and stay in the team," said the England Under-20 international. "Hopefully, as a club, we can all make it into the Premier League.

"There are about 15 games left and we're about five points outside the play-offs. The last few results haven't been the best but we're a good enough team. If everyone performs to their best ability, we should be fine."