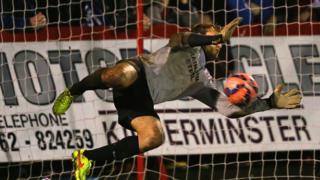 Watch the record FA Cup shootout between League One side Scunthorpe United and non-league Worcester City in their second-round replay.

The previous longest penalty shootout in the FA Cup was when Macclesfield beat Forest Green 11-10 in November 2001 in the first round.

Watch highlights from the match here.