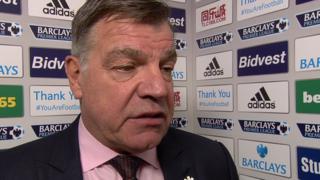 West Ham manager Sam Allardyce says his team deserved more from their 1-1 draw at Sunderland, and claims Adam Johnson dived to win a penalty for the Black Cats.

Jordi Gomez converted the spot kick to give Sunderland the lead, but Stewart Downing levelled from 18 yards via a deflection.

Stewart Downing has been directly involved in five goals in his last six Premier League appearances, with two goals and three assists.

'It doesn't matter who takes penalties'