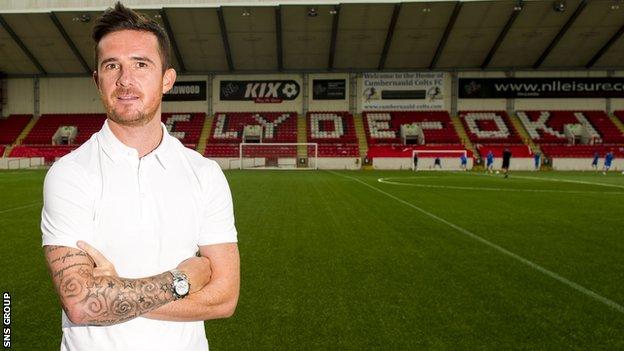 The former Scotland and Rangers captain took over at the Bully Wee in the summer and has won just four league matches from 15 outings.

"A lot of guys I played with said I was crazy but I still think it's the right thing for me - what a learning curve it is," he told BBC Scotland.

"I've made mistakes early on but I'll get it right."

Clyde sit second bottom of the table but only five points off fourth place.

And Ferguson aims to bolster his squad during the January transfer window.

"I'm allowed to bring a few players in next month," the 36-year-old explained. "I've already got two done and dusted and I've been speaking to another three or four."

Ferguson played in 45 internationals, over 80 European ties with Rangers and lifted 16 major trophies.

"The club is homeless, we only rent the stadium for match-days," he added on his job at the part-time club. "I'm sorting out training facilities, I need to sort out the kit and I look after my own budget.

"I've been used to full-time football all my days, so it's difficult working with the guys two nights a week.

"Some can't turn up, you get a phone call saying 'gaffer I've got the chance of overtime', and I can't say no - that's their bread and butter.

"We've got the lowest budget in Scottish football, so the players don't do it for money.

"It's been hard for me to get to gets to grips with it but I'm getting my head round it now."

"I saw the guy later and he was fine - he apologised, saying he had too much to drink," he said. "I apologised for my conduct too. I was out of order.

"I should know better. You're playing in stadiums with 400 or 500 people; you can hear every single word that's being said.

"That's over and done with and I need to learn from it."