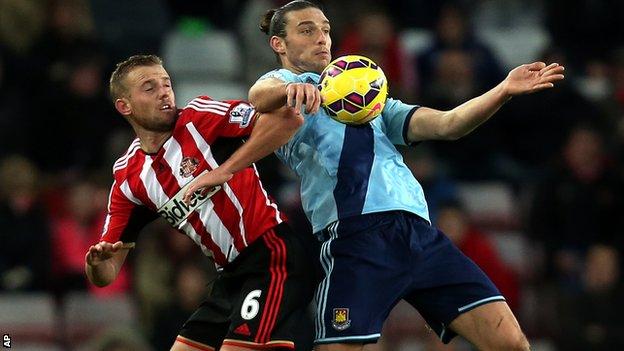 West Ham maintained their place in the Premier League's top four by coming from behind to draw at Sunderland.

They trailed to Jordi Gomez's penalty, given when Sunderland's Adam Johnson fell under James Tomkins' challenge.

That decision angered Hammers boss Sam Allardyce but Stewart Downing levelled from 18 yards via a deflection.

Jozy Altidore's glaring close-range miss proved crucial for Sunderland, who drop to 15th, and the visitors' Aaron Creswell had a one-on-one chance saved.

Sunderland have now drawn 10 games from 16 but may take some comfort from the fact their latest point comes against a side enjoying their best start in 31 years.

The West Ham side of 1973-74, boasting players such as Trevor Brooking and Frank Lampard Snr, imploded after the turn of the year, but Downing's equaliser at the Stadium of Light perhaps shows their current team are made of stern stuff.

Goalkeeper Adrian made a stunning late save to deny Connor Wickham, while Winston Reid and Tomkins completed twice the number of clearances made by their opposing central defenders.

Tomkins was furious when his challenge on Johnson was penalised, resulting in Gomez's coolly-taken spot-kick, and Allardyce berated referee Phil Dowd when the official walked to the touchline to calm the West Ham boss.

He settled, briefly, but punched the air jubilantly moments later when Downing cut in from the right to drive in from 18 yards via a deflection.

Fresh from fixtures with Chelsea, Manchester City and Liverpool, Sunderland boss Gus Poyet said his side must start winning ahead of kick-off and they will look at Altidore's miss with the final kick of the opening half as key.

The American striker is yet to score in 10 league outings this season for a Sunderland side who have failed to score in seven of their last 12 games.

Their shortcomings in front of goal are not for lack of willing and indeed both sides, each operating a 4-4-2 system, pressed for a winner, with Adrian's tipped save from Wickham pivotal.

And at the other end Andy Carroll, who had seven attempts on goal, also fired wide with minutes remaining as West Ham's three-game winning run ended.

They now go into a Christmas fixture list, which includes meetings with Arsenal and Chelsea, in their highest league position at this stage of the season during the Premier League era.

Sunderland manager Gus Poyet: "We cannot ask the players for more, we cannot be more organised, but there is something missing and we need to find it.

"Luck helps, but we need to hit the target. When you have a break you need to put in a good cross.

"To play the football I want, at the moment we are quite far away. We are doing as much as we can at the moment."

West Ham manager Sam Allardyce: "It was not a penalty and it is as simple as that. It was given by the assistant referee and he got it horribly wrong.

"I wanted three points. I think the performances and chances created deserve that but we respect a point away from home in the Premier League.

"The overall performance from the players was excellent and you have to be satisfied when you come back from a goal down."