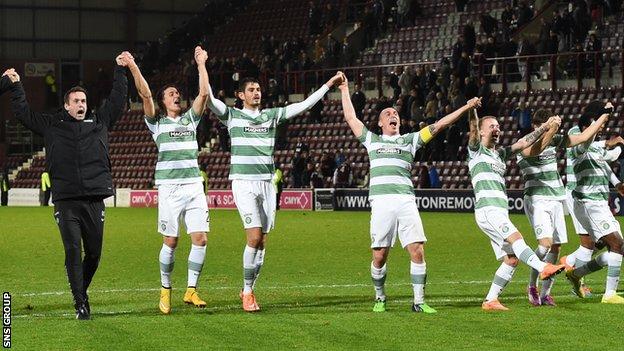 Ronny Deila wants future visits to Tynecastle to retain their passion after fans were criticised for their behaviour at Sunday's Scottish Cup tie.

Hearts owner Ann Budge was "appalled" by vandalism while also complaining of "intimidation" of home supporters during Celtic's 4-0 victory.

And Celtic outlined their concerns about "coin-throwing" and "sectarian abuse directed at staff and players".

Manager Deila said: "It was an intense atmosphere but that's nice."

The Norwegian added: " I didn't think it was hateful. I enjoyed it. That's why I came here, to have these games.

"The start of the game saw a lot of intensity and it was a real battle and that makes Scottish football better.

"It is much better than going to a stadium which has no intensity and I think the players love it as well."

Budge said "close to 100 seats" had been destroyed by visiting fans, while a Celtic statement complained of "a home supporter again attempting to enter the field of play, this time to approach one of our players" while referencing an attack on former manager Neil Lennon at the Edinburgh stadium in 2011.

"There was a lot of people there so sometimes things happen which we have to deal with," added Deila.

"In Sweden it is worse, so other countries have more problems than in Scotland.

"But it is important that when families come to stadiums they feel safe.

"We want to have the focus on football and that is what we are going to do in the future. We are going to sort these things out with Hearts."