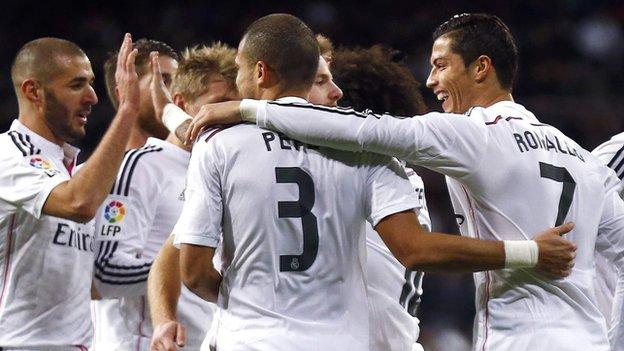 Cristiano Ronaldo set two personal milestones as he led Real Madrid to a record-equalling 18th-straight win on a historic night at the Bernabeu.

The Portugal forward has now scored more hat-tricks than any other La Liga player after completing his 23rd treble with his 200th Spanish top-flight goal.

He put Madrid ahead by drilling in a disputed penalty, after he had been fouled under seemingly minimal contact.

Ronaldo, who is the favourite to win the 2014 Ballon d'Or for his performances this year, was given a standing ovation as he was substituted towards the end of another memorable performance.

The 29-year-old had scored the same number of hat-tricks as legendary Madrid forward Alfredo Di Stefano and Telmo Zarra of Athletic Bilbao, and eclipsed their tallies when he steered in Marcelo's cross.

And it also meant he reached his second century of La Liga goals in his 178th match for Real.

Ronaldo illuminated the Bernabeu in the final stages of what had been a largely uninspiring performance from Carlo Ancelotti's side against mid-table Celta.

Celta shaded possession against their illustrious rivals, but failed to have a meaningful shot on target at Iker Casillas' goal.

And Ronaldo took advantage to fire Madrid to their 18th successive victory in all competitions - matching the Spanish record set by Frank Rijkaard's Barcelona between October 2005 and January 2006.

Meanwhile, defending champions Atletico Madrid moved up to second after a 2-0 win at Elche earlier on Saturday, although Barcelona can overtake - and reduce the gap on Real back to two points when they host Espanyol on Sunday.

Shots on Target
Home11
Away0