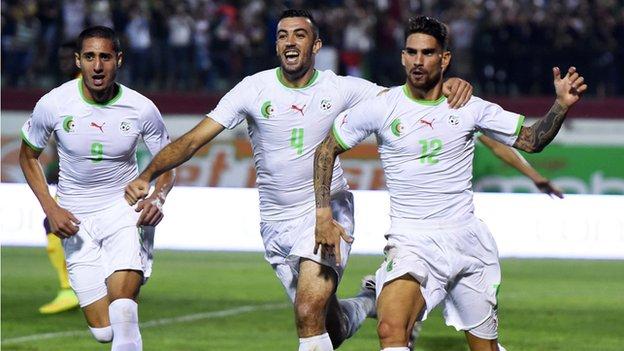 Algeria, the highest-ranked side on the continent, face a tough draw for the 2015 Africa Cup of Nations finals.

The Desert Foxes, who reached the second round of this year's World Cup, will face Senegal, Ghana and South Africa in Group C.

Group B features Zambia, DR Congo, Cape Verde and Tunisia, while in D it is Ivory Coast, Guinea, Cameroon and Mali.

The tournament, which will be played between 17 January and 8 February, was originally due to be held in Morocco but their request to postpone the event over fears of the potential spread of the Ebola virus was rejected by the Confederation of African Football.

Equatorial Guinea, who have been reinstated in the competition despite fielding an ineligible player in qualifying, will face Congo in the opening match.

The Congolese will be coached by Claude LeRoy, who will be appearing at his eighth Nations Cup tournament with his fifth different country.

Both Equatorial Guinea and Gabon reached the quarter-finals when they co-hosted the tournament in 2012.

Burkina Faso will be looking to prove their run to the final in 2013, when they lost to Nigeria, was not just a one-off achievement.

Zambia, who are the seeded side in Group B, lifted the trophy in 2012 in the Gabonese capital Libreville but only after playing all their matches before the final in Equatorial Guinea.

Tunisia were also at the 2012 finals but played their games in neighbouring Gabon, while DR Congo and Cape Verde did not qualify.

In Group C, Senegal will be hoping to improve upon their performances from their last trip to Equatorial Guinea when they lost all three of their matches, despite being some people's tip to win the tournament.

However Alain Giresse's side will have their work cut out for them in an extremely tough group.

It includes a resurgent South African side, who were unbeaten in the qualifiers, an Algerian side ranked number one in Africa by Fifa and Ghana, who will be under the leadership of experienced coach Avram Grant.

Group D reunites Cameroon and Ivory Coast, who were in the same pool for the qualifying stages.

Cameroon put a poor World Cup behind them to qualify unbeaten for the 2015 finals, a run that included a 4-1 win over Ivory Coast in Yaounde.

The defence will be a worry for Ivory Coast, given they conceded 11 goals en route to the finals and lost 4-3 at home to DR Congo along the way.

The Guinea squad will be representing a nation that has been ravaged by the Ebola virus, which has claimed almost 7,000 lives in west Africa up to 24/25 November according to the World Health Organisation, and will be determined to give fans back home something to cheer about.

The Syli Nationale had to play all their matches away from home after being prevented from playing in Conakry because of Ebola.

Mali will have fond memories of Equatorial Guinea as it was in the capital Malabo that they clinched the first of their consecutive third place finishes at the Nations Cup.