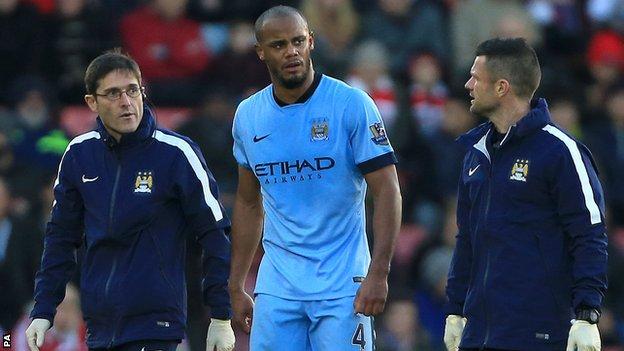 The Belgium defender, 28, is already out of this week's Premier League matches with Sunderland and Everton.

"How his injury will improve in the next seven days depends on the degree of muscle injury," said Pellegrini. "It is difficult to know at this moment."

Meanwhile, David Silva is unlikely to return against Everton on Saturday.

The Spain midfielder, 28, has not played since injuring his knee on 29 October, and Pellegrini says he only has a slim chance of facing the Toffees at Etihad Stadium.

Silva was expected to be out for three weeks after being hurt in the early stages of last month's League Cup fourth-round defeat by Newcastle, but has missed City's last six matches with the problem.

"David is improving and we will see on Thursday if he can be in the squad for Everton," Pellegrini said. "I'm not sure - I think it's difficult."

The Blues travel to Italian runners-up Roma on Wednesday, 10 December, needing a positive result as they attempt to reach the Champions League last-16 for the second successive season.

The Premier League champions will qualify from Group E if they better CSKA Moscow's result against Bayern Munich. But if City lose their game at the Stadio Olimpico, or it ends in a 0-0 draw, they will go out of the competition.

Pellegrini says they might be without centre-back Kompany, who was injured in Sunday's 3-0 win at Southampton.

"He is not able to play against Sunderland or Everton but Rome depends on diagnosis of the doctor," added the Chilean in a news conference on Tuesday.