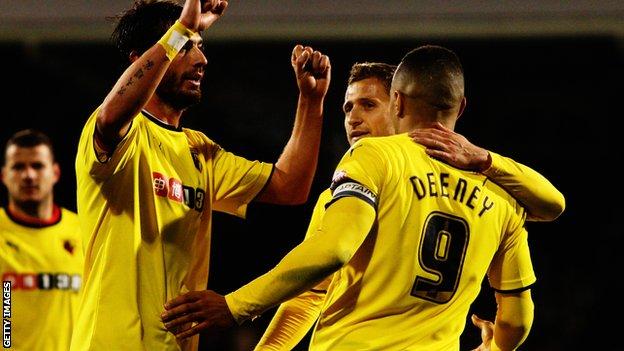 Troy Deeney reignited Watford's promotion bid with a hat-trick as the Hornets swept aside 10-man Fulham.

Watford had lost their previous four matches to slip from top of the Championship to seventh.

But Slavisa Jokanovic's side dominated at Craven Cottage, with Almen Abdi scoring twice.

Fulham were always second best and after goalkeeper Marcus Bettinelli was sent off 20 minutes in, it was a case of damage limitation.

Kit Symons' side had been searching for a fifth win from their last six home games.

But it never looked on the cards after Abdi opened the scoring with a free kick and Bettinelli was then dismissed for bringing down Matej Vydra as the Czech striker rounded him.

Deeney slotted the resultant spot kick past substitute keeper Gabor Kiraly - the Watford skipper's first goal in six matches - and the frontman struck again before the break when he latched on to Gianni Munari's header in the box.

Abdi scored a superb goal after the break - his powerful, curling drive from 25 yards flying into the top corner - before Deeney completed his hat-trick deep in stoppage time, racing clear to beat Kiraly.

Watford boss Slavisa Jokanovic: "After a bad November we have started December better. It was very close to a perfect performance after some bad results.

"We played a fantastic game. I must be happy, I expect my players and supporters go home happy."

Fulham boss Kit Symons: "There's quite a lot we can learn from that. There is a lot of hard work and a lot of improving to be done.

"We started very poorly and Watford came out all guns blazing. We gave away a bad goal and then the sending-off makes life difficult. We had a mountain to climb."