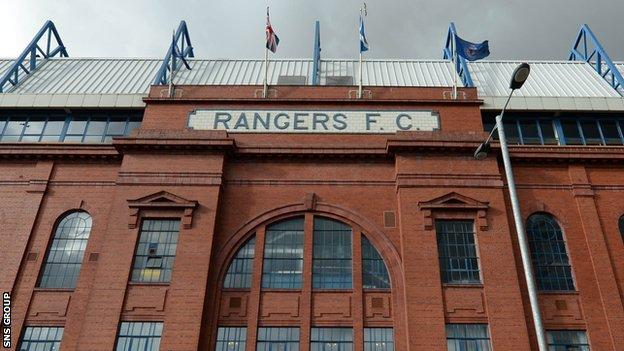 Rangers will seek a fresh share issue after announcing an operating loss of £8.3m for the 12-month period to 30 June 2014, with fresh funding needed as soon as January.

However, the preliminary results report warned they would need an extra £8m investment in the next 12 months.

The club say costs have been "significantly reduced", and are down on the previous year's £14.4m loss.

Club directors say they have been "approached by several parties offering funds on a secured basis".

They added: "Conversations are at an early stage but it does appear that a commercially acceptable agreement can be secured."

Auditors have included an emphasis of matter paragraph, highlighting that there is "material uncertainty on the Group's ability to continue as a going concern".

Chairman David Somers said: "Challenges still remain and despite additional financing having been secured over the year, further funding is necessary to ensure the club's ability to move forward successfully to achieve the goals we all seek and expect of Rangers Football Club.

"To this end the board will be seeking shareholder approval at the forthcoming AGM to issue additional shares to ensure maximum flexibility for the company to raise equity finance and provide the financial capability required to develop the club in the longer term."

The AGM will be held at Ibrox on 22 December.

Financial highlights from the report show revenue is up by 32% to £25.2m, retail revenue increased to £7.6m from £1.6m, and sponsorship and advertising rose to £1.5m.

The club's independent auditor, Deloitte, added: "The group requires additional funding to continue to meet its liabilities as they fall due.

"These conditions around the need to secure further funding, along with the details provided in note 1 of the financial statements, indicate the existence of a material uncertainty which may cast significant doubt over the group's ability to continue as a going concern and therefore that the group may be unable to realise its assets and discharge its liabilities in the normal course of business."

The note states that Rangers do expect promotion to the top flight this season, despite falling nine points behind Hearts in the Scottish Championship last weekend, with a consequent uplift in season ticket income and other revenue in the summer.