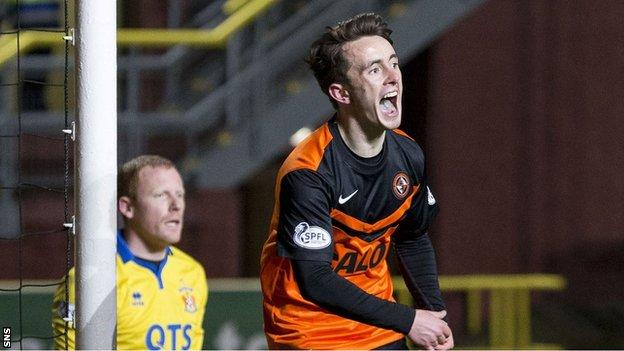 Dundee United forward Aidan Connolly is determined to build on his recent emergence and aspires to follow the "magnificent" Andy Robertson.

"At the start I felt I was playing OK but not getting in the team," Connolly told BBC Scotland.

"But now that I've got my chance I feel I've taken it with both hands."

The former Queen's Park striker notched his second goal of the season in injury time against Killie, converting a cross by another ex-Spiders youth player, Blair Spittal.

Connolly had already netted in Jackie McNamara's side's win over Hibernian in the League Cup.

"When the gaffer signed me I knew that he believed in me," said the former Williamwood High School pupil.

"I've got my chance and I just need to keep going and keep scoring goals.

"I think we've got one of the strongest squads (in the Scottish Premiership) and there's good competition."

and newspaper reports are linking him with a move to Arsenal and Manchester United.

He also scored his first Scotland goal in the friendly defeat to England.

Robertson and Connolly are two of several ex-Queen's Park players to have progressed to the Tangerines.

Paul Paton and Spittal also used to be on the books of the Hampden side.

"Queen's Park's got a great set-up and all the coaches there are brilliant.

"Andy Robertson's doing magnificent and it's great to see."