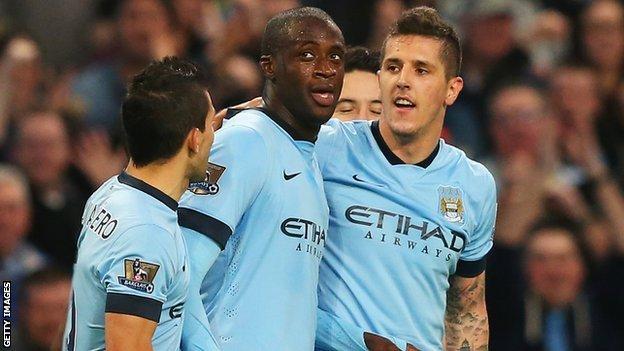 It was the Ivorian's fourth goal of a campaign marred by speculation he is keen to leave the club, compared to seven by the same point 12 months ago.

"I think it was an important game for Yaya," Pellegrini said.

Toure went into the game at Eastlands off the back of playing in two Africa Cup of Nations qualifiers for Ivory Coast and Pellegrini was particularly pleased with the way the 31-year-old coped with the physical demands of such a hectic schedule.

"Maybe, because he played for the national team on Wednesday and played two games in a week, he was tired but he had the character to try to continue to play until the end," he said.

Pellegrini also defended Toure's goalscoring record this season, insisting he should not be judged ion that alone.

"I think he played very well but I don't think you can analyse whether Yaya scores or doesn't score," added the Chilean.

"It is impossible for him to score the amount of goals he scored last season, he's not a striker, he's a midfielder.

"It's always important for a player to score but more than Yaya, the whole team must be happy because I think we played very well today."