Argentines have overtaken Welsh players for minutes on the pitch in the Premier League, according to a BBC Sport study.

In matches played up until 1 October this season, Welsh players accounted for 2.45% of total minutes in England's top division, State of the Game found.

This represents a slight fall from a last season's figure of 3.12%.

However a rise in the number of Argentines in the top flight saw Wales slip from eighth to ninth top country for total minutes played.

There were 13 Welsh players who got on the field in the Premier League in the period covered by the study. However the number of Argentines increased from 12 last season to 18 as they leapt from 10th to fifth overall.

England, Scotland, the Republic of Ireland, France, Spain, Belgium and the Netherlands were the other nations ahead of Wales.

State of the Game analysed the total minutes played by each nationality in the Premier League, Championship and Scottish Premiership to 1 October this season and in 2013-14.

Swansea City, Wales' only Premier League club following the relegation of Cardiff City last season, used the most Welsh players. The Swans fielded three players from their homeland in the period studied and were the only team, along with Crystal Palace (two), to field more than one Welsh player.

Others to include a Welshman in the first six matches of the campaign were Arsenal, Hull City, Leicester City, Liverpool, Newcastle United, Southampton, Tottenham Hotspur and West Ham United.

However, less than a quarter of the 13 Welsh players used (three) featured in every game.

That overall figure of 13 is only one down from the same period for last season but represents a decline in the amount of actual time spent on the field. Compared with 3,757 minutes at the same stage in 2013-14, Welsh players had completed 2,907 minutes in the top flight.

In the Championship, Welsh players had a slightly larger percentage of total minutes than last season, up from 3.8% to 3.91%.

A total of 24 Welsh players were used in the Championship. Reading, Charlton Athletic and Wolverhampton Wanderers each used three while Cardiff used one, Declan John, who had played for 45 minutes.

In the Scottish Premiership, Welsh players went from 1.09% to 0.92% of total playing time. 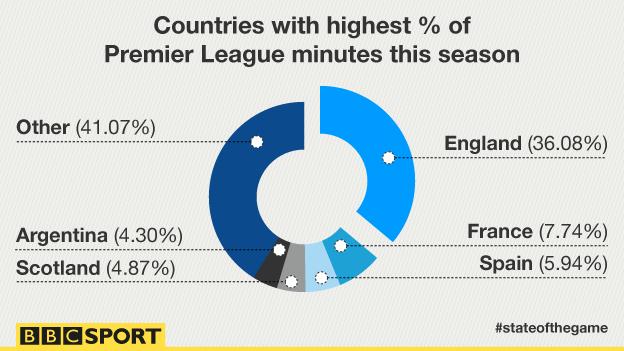