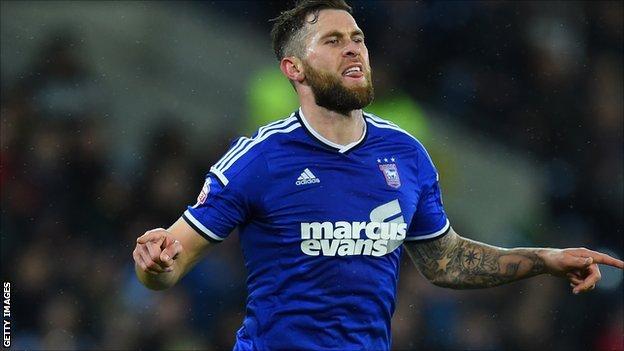 Ritchie's close-range shot at the back post put Bournemouth back in front, but Murphy equalised with a header from Paul Anderson's free-kick.

The result put Bournemouth three points behind Derby, with Ipswich a point further behind in fourth.

The Cherries began at a blistering pace with Ritchie thumping the bar from 18 yards before Kermorgant found the net with a superb strike for his fourth of the season.

Bournemouth continued to press and Ipswich had goalkeeper Bartosz Bialkowski to thank after he denied Marc Pugh, Callum Wilson and Ritchie in quick succession.

Ipswich grew into the game as the half wore on and a header by Murphy glanced the crossbar.

Cherries keeper Artur Boruc was also called into action before the break, first saving David McGoldrick's strike with his legs, before tipping Christophe Berra's header over the bar.

That scoreline lasted just four minutes as Bournemouth went back in front, Wilson finding Ritchie, who converted at the back post.

Bournemouth were denied a penalty after substitute Tokelo Rantie was sandwiched by two Ipswich defenders, an incident that resulted in the South Africa striker being stretchered off and forced 12 minutes of stoppage time.

Pugh's shot was then well saved by Bialkowski, but it was Ipswich who scored next with Murphy's header from Anderson's swung free-kick to make it 2-2.

Bournemouth pushed for a winner, with Pugh curling a shot just wide and seeing another effort saved, while Harry Arter blazed over the bar and Brett Pitman wasted another chance in added time.

Ipswich boss Mick McCarthy: "I won't have this little old Bournemouth routine because if you come down here with that attitude you will get a slap. They have got a team of real hard-nosed players and they have spent a few bob on getting that.

"If you get a point away from home it's a good point. I would take a point without getting off the bus because of how competitive this league is."

Bournemouth boss Eddie Howe: "We made a great start. We looked in great form and like we would carry on our good run.

"I couldn't be more pleased with the team and I think the only thing that was missing was the goals. I think it was one of our very best performances of the season."