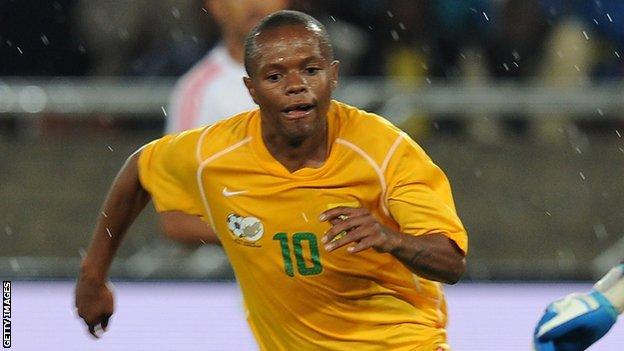 South Africa are among six teams on Saturday to have booked their place at the 2015 Africa Cup of Nations after each won their penultimate qualifier.

Cameroon, Zambia, Burkina Faso, Gabon and Senegal are the others to have sealed their progress.

The six countries join the already-qualified trio Algeria, Cape Verde, Tunisia, and new hosts Equatorial Guinea at next year's tournament which will be be played from 17 January to 8 February.

He will be our guardian angel. He will be watching over the boys at the finals

South Africa beat Sudan 2-1 to secure one of the two automatic qualification spots in Group A with a game to spare.

Thulani Serero opened the scoring seven minutes before the interval - the goal helping to settle an emotional South Africa team, who were playing for the first time since the death of goalkeeper Senzo Meyiwa.

South Africa switched the match to Meyiwa's home town of Durban as a tribute to the man who captained Bafana Bafana in their first four Nations Cup qualifiers without conceding a goal.

Mid-way through the second half, Tokelo Rantie struck South Africa's second to give his side breathing space.

Sudan became the first side to score against South Africa in their last five Nations Cup matches when Salah Ibrahim pulled a goal back, but the group's bottom club could not pull off a shock comeback.

The result brings to an end a run that has seen South Africa fail to qualify by right for a tournament since the 2008 Nations Cup - they played at the 2010 world Cup and the 2013 Nations Cup as hosts.

"A tragedy like that can always be inspiration for the team and the nation. They should go to the finals and win in his honour. He will be our guardian angel. He will be watching over the boys at the finals."

In the group's other match African champions Nigeria have given themselves a chance of securing an automatic qualifying spot by beating Congo 2-0 - a scoreline that could prove significant.

Nigeria went into the match three points behind Congo and knew that only victories in their last two qualifiers would suffice. Additionally they needed to improve their-head-to-head record against Congo, having lost 3-2 in the reverse fixture.

Saturday's result means the Super Eagles will snatch a berth in Equatorial Guinea by beating South Africa on Wednesday, as they have now scored more goals than Congo in their two meetings.

Nigeria have goalkeeper Vincent Enyeama to thank for their advantage, with the stopper saving a penalty from Thievy Bifouma when his side were 1-0 up.

Ikechukwu Uche had set Nigeria on their way and, after Enyeama's heroics, Aaron Samuel struck the vital second goal that puts the fate of Stephen Keshi's side in their own hands.

Mali missed an opportunity to qualify as they fell 2-0 to Malawi - a result that keeps alive the victors' hopes of qualification.

Robert Ng'ambi and Esau Kanyenda scored the goals for Malawi, who are now level on points with their opponents, with only one game left to play.

Table-toppers Algeria have already qualified and beat bottom side Ethiopia 3-1 with Sofiane Feghouli, Riyad Mahrez and Yacine Brahimi scoring to keep up their 100% record.

Burkina Faso and Gabon have both qualified.

The Burkinabe, who were runners-up in 2013, go through thank to a 1-0 win over Lesotho, secured by a goal by Jonathan Pitroipa - the man who was named player of the tournament in South Africa two years ago.

Gabon also made it through after they drew 0-0 with Angola.

Cameroon went some way to erase their memories of a disastrous World Cup campaign by bouncing back to clinch a spot at the continental showpiece.

The Indomitable Lions overcame Democratic Republic of Congo 1-0 to book their ticket, courtesy of Vincent Aboubakar's strike on 71 minutes.

Four-time champions Cameroon are unbeaten in the final qualifying phase and will go through as group winners regardless of results in the final round of matches on Wednesday.

Ivory Coast are second in the table - three points ahead of DR Congo - after the Elephants thrashed on Friday.

Ghana blew a chance to seal their spot at the 17 January to 8 February tournament as they suffered a 1-0 defeat away to Uganda.

The Black Stars had been fancied to pick up the points they needed but were undone by a goal from Savio Kabugo after only 10 minutes.

The SC Victoria University defender nodded in a well-taken Mike Sserunkuma corner kick to hand Ghana their first loss of the final qualifying phase and make for a very tight group.

Togo were left stunned by Guinea who produced a 4-1 victory in Lome. Seydouba Soumah (pictured) hit a hat-trick for Guinea who ensured that the outcome of the group will be decided on Wednesday.

Issiaga Sylla had put Guinea ahead before Soumah's goals gave them a 4-0 lead. Tottenham's Emmanuel Adebayor hit a consolation goal for Togo.

Zambia, the 2012 champions,secured their passage to the finals with a 1-0 victory over Mozambique.

Both automatic qualification spots have been sewn up in the group, with Cape Verde already having sealed their place.

Senegal secured their qualification with a 1-0 win away to Egypt, courtesy of an eighth minute goal from Stoke City's Mame Biram Diouf (pictured.)

The result leaves the record seven-time champions Egypt hoping to qualify as the one best third-placed team.

Tunisia took one of the qualifying spots in the group with a draw away to Botswana on Friday.