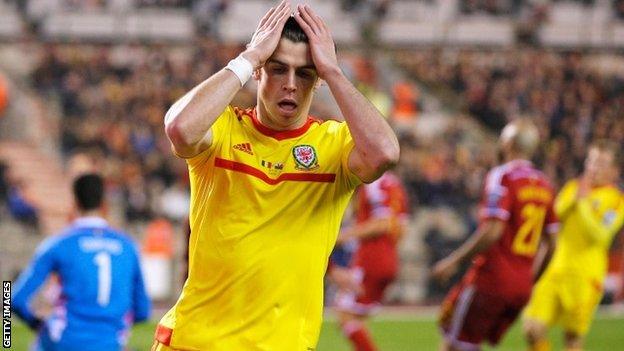 Wales dug in for a gutsy goalless draw in Belgium to maintain their unbeaten start to their Euro 2016 qualifying campaign.

Belgium bossed the first half as Nacer Chadli was denied by Wayne Hennessey and Nicolas Lombaerts hit a post.

But Wales defended stoically and had chances of their own after the interval as Gareth Bale shot narrowly wide.

The point briefly kept Wales top of Group B, before Israel took their place with a 3-0 win over Bosnia-Hercegovina.

Having made their best start to a campaign since winning their first four qualifiers for Euro 2004, Wales entered this match with renewed hope.

Despite the raised expectations, however, Chris Coleman's men were undoubtedly the underdogs against a Belgian side fourth in the Fifa world rankings.

Welsh hopes rested on Bale, and it was no surprise that it was the world's most expensive player who had the visitors' first shot on target.

The Real Madrid forward unleashed a swerving free-kick from 25 yards, but it was palmed away by Belgium goalkeeper Thibaut Courtois.

The Chelsea man's opposite number, Wayne Hennessey, was also called into action early on and made an excellent low save to deny Tottenham's Nacer Chadli.

With another Chelsea player, Eden Hazard, a constant threat as he drifted infield from the left, Belgium began to dictate and put their opponents under pressure.

From Kevin de Bruyne's in-swinging corner, defender Lombaerts struck a post with a powerful shot and, from the rebound, Divock Origi could only slide the ball wide.

For all of Belgium's Hazard-inspired domination, Wales held firm to keep the home side at bay in the first half.

Coleman's side were close to taking the lead against the run of play 12 minutes after the restart, as Bale skipped past Belgium's static defenders before flashing a shot narrowly wide of the far post.

Having brought Fulham's fast young winger George Williams on for David Cotterill at half-time, Wales posed more of a counter-attacking threat as the match wore on.

Although Belgium continued to control possession for long periods, they seemed wary of the visitors' threat and were careful not to commit too many players forward.

The Red Devils' apparent trepidation made for a tense atmosphere, and the sense of anxiety increased when Hal Robson-Kanu had a shot saved by Courtois.

Dries Mertens then required lengthy treatment after being knocked out following a collision with teenager Williams and the six minutes of injury time that followed were nervous for the Welsh.

A header by Aston Villa's Christian Benteke was cleared off the line as Belgium poured forward in the closing moments, but Wales remained resolute to claim a potentially priceless point.