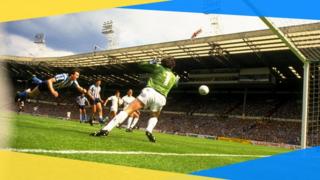 If ever a goal was fit to win an FA Cup final, Keith Houchen's diving header for Coventry City in 1987 would be right up there.

The striker netted one of the most iconic Wembley goals when he got his head on the end of a pinpoint cross from Dave Bennett to level the match at 2-2.

Ray Clemence in the Tottenham goal was left with no chance.

Bennett and Houchen had earlier proved the perfect combination as the striker's neat flick-on had allowed Bennett to score Coventry's first-half equaliser at 1-1.

The match would eventually be settled by a cruel Gary Mabbutt own goal six minutes into extra time to give the Sky Blues the Cup in their first final.