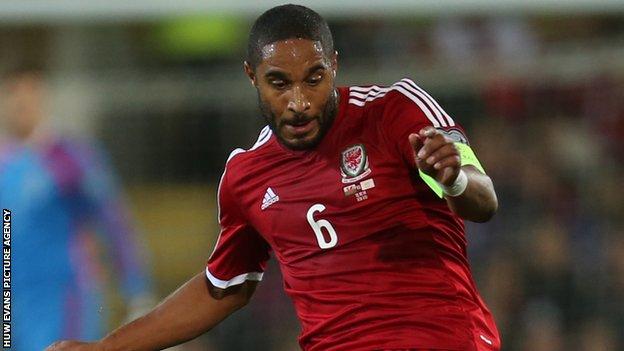 Captain Ashley Williams has insisted Wales have not set a points target as they bid to make the most of their strong start to the Euro 2016 qualifiers.

Wales travel to Belgium in November on top of Group B after the 2-1 win over Cyprus.

But the Swansea City defender says the players are not getting carried away.

"We just want to try and look after the games that come up, we're not really focused on a target," he said.

"We know we probably need 17 plus [points] to do anything, but we know we haven't set a target.

"We'll see what we can get in each game."

Wales clung on for a nerve-shredding win over Cyprus after Andy King was sent-off early in the second half.

Chris Coleman's appeared to be coasting as goals from David Cotterill and Hal Robson-Kanu gave them an early 2-0 lead.

Vincent Laban's goal and King's red card set-up a nervy second half at Cardiff City Stadium but Wales held on to secure their second win of the group.

Wales are unbeaten in Group B and have lost only once in eight internationals with Williams saying the side are building momentum.

"It would have been a shame had we not got the win, which I think we deserved.

"We haven't lost in the group now in three games and the table looks good.

"We're confident we can go into the next game with no fear."

Wales now turn attentions to next month's trip to section favourites Belgium, who are three points behind the group leaders having played a game less.

Andy King will be banned for that game, and could have his suspension increased by a Uefa disciplinary commission.

Chris Coleman's side secured a 1-1 draw against Belgium in a World Cup qualifier in October 2013, a game Williams missed because of injury.

But the captain insists Wales will have no fear against a side who reached the World Cup quarter-finals in the summer.

"It's a tough one next time," Williams said.

"It's a game we have to go to with no fear but also be clever and respect the opponent that we're playing, which is a top class opponent.

"I'm not sure how we'll go about it but we'll have a game plan and try and stick to it."