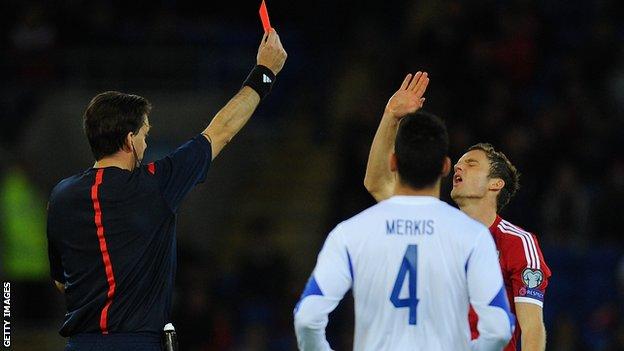 Wales midfielder Andy King will miss the Euro 2016 qualifiers in Belgium and Israel after Uefa increased his suspension for violent conduct.

Leicester City's King, 25, was sent off for a foul on Constantinos Makridis in Wales' 2-1 win against Cyprus.

The ban means King will miss the 16 November trip to Brussels and the match in Israel on 28 March, 2015.

Wales boss Chris Coleman defended King following the midfielder's dismissal early in the second half of the game at Cardiff City Stadium.

"I'm disappointed for Kingy and it's not really his fault," Coleman said at the time.

"The timing was wrong and he had a red but that's probably down to myself and the staff.

"We've been firing the lads up the last two games. We've been into the lads all week saying 'whatever they give to us, we give to them'.

King's dismissal came during a game in which nine players were booked by German referee Manuel Graf, including five Cypriots.

Coleman insisted he had no complaints about the Cypriots' treatment of Gareth Bale, who received several challenges that left him writhing on the floor.

But the Wales boss was frustrated that the referee failed to protect the Real Madrid winger.

"The red card was a heavy challenge but if he sends one of ours off surely he can send one or two of theirs off because they weren't shy either.

"Cyprus have got to do what they think is right to win the game, but the referee's there for a reason - to make a decision.

"When we play opposition in their back yard, their star players get rewards, they get free-kicks - but it doesn't happen for us."

Coleman's side appeared to be coasting as goals from David Cotterill and Hal Robson-Kanu gave them an early 2-0 lead.

But a goal from Vincent Laban and King's red card set up a nervous second half.

"We probably [wouldn't have won] that game in the last campaign. We didn't have that same togetherness then," Coleman said.

"The players were absolutely magnificent. We've only had one defeat in eight games and we've not lost here for a year.

"People have questioned the players' team spirit and [whether they] want to play for Wales, but I don't think I have to answer that any more. As a nation, we can't ask for any more."