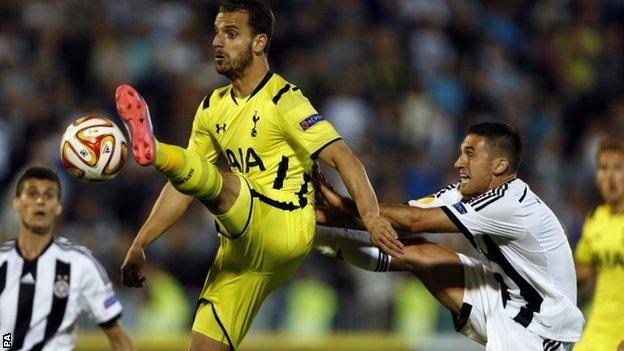 The visitors dominated the first half and striker Harry Kane could have put Spurs ahead within 60 seconds only for the crossbar to deny him.

A defensive lapse from Federico Fazio nearly put Danilo Pantic through, but the defender was let off the hook.

Clear chances were rare, though Sasa Ilic wasted a chance from distance.

The result, in what was Tottenham manager Mauricio Pochettino's first managerial outing in the group stages of the Europa League, was an adequate reflection of the match.

Serbia SuperLiga leaders Partizan, unbeaten in 11 games in all competitions, finished the stronger side but rarely tested goalkeeper Hugo Lloris.

Tottenham, their personnel much-changed from the team which drew 2-2 at Sunderland last weekend, were snappy and compact in the face of Partizan's second-half offensive.

And both teams will be hearted that Asteras Tripolis and Besiktas drew 1-1, leaving all four Group C sides with a point each after the opening round.

Perhaps the visitors will rue not creating more - or at least hitting the target - during what was a comfortable first half for Pochettino's men.

They were bright and energetic and, despite the uneven surface and the raucous atmosphere, dictated and monopolised possession.

It was only the crossbar which prevented Kane, starting even though Roberto Soldado had recovered from neck and back problems, from scoring early on.

But for all of Tottenham's endeavour - with Andros Townsend a constant threat - the visitors failed to cause trouble inside Partizan's box and the best chances fell to the 25-time Serbian champions.

Partizan's coach Marko Nikolic had said before the match that his team had "nothing to lose" against the Londoners, and after the break they were more of a reflection of their manager's gung-ho words.

In a bid to halt the wave of white-shirted attacks, Pochettino brought on Erik Lamela and Soldado before the hour and the introduction of the Spaniard nearly paid immediate dividends, with the striker's beautifully-timed cross almost finding Kane.

It was as close as Spurs got to causing Partizan a defensive headache, although extending their unbeaten record in the group stages of this competition to 14 matches will be of some consolation.

At the other end of the pitch, the home team should have posed a greater threat but Ilic's wild shot from distance was as good as it got before the match fizzled out in the final 10 minutes.

Tottenham manager Mauricio Pochettino: "We knew it would be difficult. The result was fair.

"We competed and got a clean sheet. In the end it was a tough game and difficult to do well. We tried. One point was a fair result."