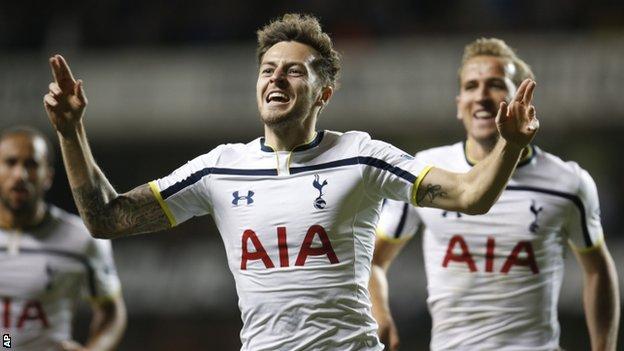 Tottenham came from behind to knock Championship leaders Nottingham Forest out of the Capital One Cup.

After striking the bar in the first half through Ben Osborn, Forest took the lead after the break when Jorge Grant stroked in Lars Veldwijk's cross.

Harry Kane set up a last-16 home tie against Brighton with a sharp finish.

Despite dominating possession, Spurs were made to work hard for their first victory in five matches by a spirited Forest side.

To mark the 10th anniversary of the passing of their legendary manager Brian Clough, Forest fans in the away end at White Hart Lane wore replicas of his famous green round neck jumper.

Tottenham, showing 11 changes from their 1-0 home defeat by West Brom at the weekend and captained by Aaron Lennon, went on the offensive from the start, only to see their attacks break down on the edge of the box.

Forest were involved in little of the play, but made an explosive entry into the game midway through the half. Osborn won the ball into his own half, attacked the heart of the Tottenham defence and curled a left-footed shot that struck the underside of the bar.

Tottenham's first clear-cut chance did not arrive until 10 minutes after half-time. Left-back Ben Davies swung over a cross from the left that found Paulinho, but the Brazilian's deft flick went past the post.

Forest broke the deadlock against the run of play. Spurs failed to deal with a high ball, and Veldwijk's low cross deflected to Grant, who calmly found the net on his first senior start.

Spurs boss Mauricio Pochettino responded by bringing on striker Kane and midfielder Mason, a 23-year-old who has had loan spells at five different clubs.

Kane stung the palms of De Vries with a header before Mason fired in a spectacular equaliser. After teeing himself up from 25 yards, he struck a dipping, swerving effort into the top corner.

Townsend, a constant menace, curled a free-kick onto the bar, and played a big part in the goal that put Tottenham ahead.

His low shot from outside the area was heading wide before Soldado stuck out a boot to divert it over the despairing De Vries.

Tottenham made victory certain in the final minute when substitute Eric Lamela slid a ball through to Kane, who drilled his shot into the far corner.

"Now I am happy, happy for the players because it was a great effort. Never in doubt.

"Going 1-0 down was difficult, but we got a great reaction, an important reaction for our supporters, who encouraged us and backed us.

"It was great after the result. We won and I am happy for the players."

"I think tactically we got it pretty much right.

"I think the players - and when I say the players, the whole squad of players - attempt to please you in everything that we impart on them.

"There was a lot of young players on the pitch for us tonight and I thought they did outstandingly well, as well as the senior ones that hadn't played a lot of football.

"Tottenham will be more than pleased that they managed to get through in this competition and not get beaten at home again. They had a big scare."