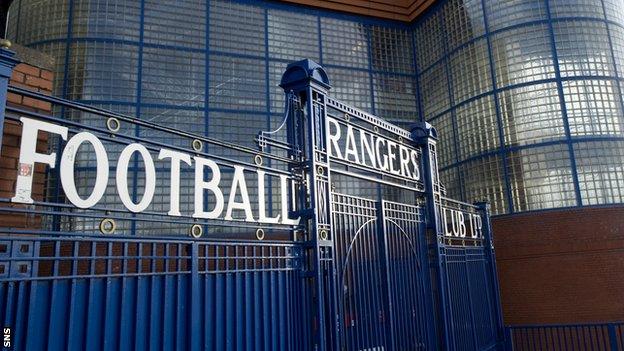 A source close to Sandy Easdale has told BBC Scotland that Rafat Rizvi has been introducing investors to Rangers.

Bin Ahmad has since been quoted by a Malaysian news agency denying any relationship with Rizvi.

That prompted a Rangers fans group to repeat its call for the other directors to remove Easdale from the football club board.

The Union of Fans, a coalition of Rangers supporters groups, has stated its opposition to Rizvi having any involvement at Ibrox. He has previously been associated with the former chief executive Charles Green and the former commercial director Imran Ahmad.

Rizvi attended the meeting in Glasgow last week with Easdale, Bin Ahmad and two of the Malaysian businessmen's associates. A Malaysian news agency has since quoted Bin Ahmad as denying that Rizvi was part of his entourage.

Rizvi's role in proceedings raised controversy as he is wanted in Indonesia over a conviction in absentia for banking crimes, leading Rangers to issue a statement that said he was an advisor to Ahmad.

Ahmad was also quoted as saying that his associate, understood to be Azman bin Ismail, was interested in buying the club. Ahmad and Bin Ismail were pictured in Glasgow last week, having had lunch with Easdale and Rizvi.

The source added that Easdale remains hopeful of attracting external investment to Ibrox.

Bin Ahmad is chairman of Malaysian Super League side Felda United and an Ibrox spokesman insisted that the purpose of his visit was to investigate a potential youth and community tie-up with the Scottish Championship club.

The Malaysian news agency report quotes Bin Ahmad as saying: "I have no idea who Rafat Rizvi is."

Easdale claimed in an interview last year that he had not had any business dealings with Rizvi.

The Union of Fans have called for the Rangers International Football Club directors to act against Sandy Easdale, who is a shareholder and chairman of the football club board but is not a member of the plc board, of which his brother, James, is a non-executive director.

"The Union of Fans has already called for the Rangers PLC board to remove Sandy Easdale due to his involvement with convicted fraudster, Rafat Rizvi," said UoF in a statement.

"But the board issued a statement denying prior knowledge of any involvement from Rizvi. Now, Mr Bin Ahmad of the Malaysian delegation, who the board claimed Rizvi was part of, has also denied all knowledge of him. This further fuels the feeling that the PLC directors are not in fact directing the affairs of the company.

"We repeat our call for the PLC board to disassociate itself from Rizvi by removing Sandy Easdale immediately from his position as a club director.

"Does Norman Crighton, who is also non-executive Chairman of Weiss Korea Opportunity Fund, welcome Rizvi's involvement? Does David Somers, who also sits on the board of Ace Europe Life PLC and is a trustee at Fujitsu Technologies, condone the involvement of a fraudster wanted by Interpol in a company of which he is chairman?

"If the board refuse to remove Mr Easdale then fans and shareholders will be within their rights to assume that they condone the involvement of Mr Rizvi.

"The board may be able to do little about the block of shareholders who Mr Easdale represents, and who are linked to Charles Green, Imran Ahmad and Rizvi. However, they can stop Mr Easdale from controlling the affairs of the club, on behalf of those shareholders, through his directorship.

"Mr Easdale has claimed that he wishes to leave his past behind him and show that he has been rehabilitated. he said, 'To cast up 17 years ago seems silly when everybody else has moved on. Let's look at what is happening now'.

"Well, we are looking at what is happening now and we find it extremely difficult to ignore his past when he consorts with a convicted fraudster on the Interpol wanted list."