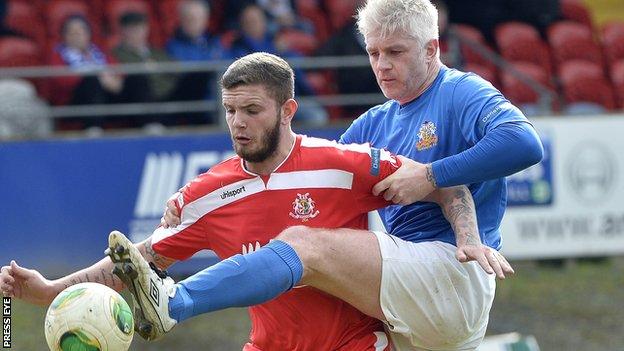 Premiership leaders Glenavon will be without defender William Murphy for the Mid-Ulster derby against Portadown.

Murphy has a hamstring injury as Glenavon go into the Mourneview Park clash three points ahead of the Ports.

"It's very difficult to dominate derby games, though Portadown had done it for about 15 years until last season," said Lurgan Blues boss Gary Hamilton.

"I hope we can take the experience we've built up in big games we've played recently into the match."

"It's hard to predict the result as it all depends who turns up on the day," Hamilton told the club website.

Portadown's derby clash with league leaders Glenavon is the feature game on Saturday Sportsound, presented by Michael McNamee on Radio Ulster from 14:00 BST.

Grant Cameron is on commentary at Mourneview Park along with former Glentoran and Cliftonville winger Tim McCann.

Michael Hammond and Lindsay McKeown will take through the action from Ballymena v Glentoran while there are reports from the other four games.

"Portadown have brought in three excellent players in Robbie Garrett, Mark McAllister and Michael Gault and, in my opinion, they'll be up there challenging for the title this season - they weren't far away last time."

Cliftonville are the only unbeaten team in the league and the champions take on struggling Coleraine at Solitude.

Crusaders make the trip to Dungannon Swifts while third-placed Ballymena United face Glentoran at the Showgrounds.

"Glentoran play good football, they are a young, enthusiastic team and there's no pressure on them," said Sky Blues manager Glenn Ferguson.

"They play with no fear, which is half the battle so it promises to be a tough test."

Linfield return to their Windsor Park home on Saturday after an opening run of six away games because of construction work at the international stadium.

Warrenpoint Town provide the opposition and the basement club have picked up four points in their last two games after losing the first five.

"This is going to be a very tough game - Warrenpoint have had two very good results against Cliftonville and Dunganonn," said Blues boss Warren Feeney.

"But it's a game we'll be confident going into and we will just worry about ourselves.

"We've had a good start to the season despite being away from home and if we won our game in hand we would be joint top.

"However, just because you're at home doesn't mean you are going to win football matches."

Ballinmallard go into their Ferney Park meeting with Institute aiming to build on their first league win of the season last Saturday against Ballymena.