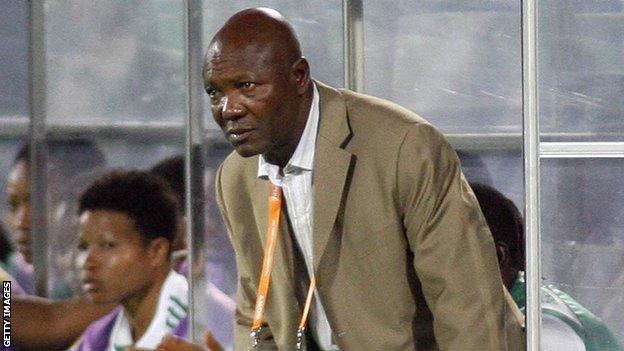 Former Nigeria women's coach Ntiero Effiom, who led the national side to their fifth straight African Women's Championship title in 2006, has died after a brief illness in Cross River state.

Effiom passed away on Wednesday aged 67 in hospital, with doctors saying he suffered a stroke, according to his wife.

"He was a great inspiration, a good man who believed in me," two-time African women footballer of the year Cynthia Uwak told BBC Sport.

"I'm still in shock, I can't put words together but I pray he finds rest in the bosom of The Lord."

Uwak, who made the shortlist for the 2006 Fifa World Player of the Year award and came in 11th in the final votes' tally, says the death of Effiom is a great loss.

"He was one of the top coaches in Nigeria who worked passionately in women's football," Uwak added.

Effiom coached Cross River State-based club Pelican Stars to multiple Nigerian league and Cup titles before being appointed to take charge of Nigeria's U-19 Women's side at the World Championship in Canada in 2002.

Two years later he was promoted to coach of the Super Falcons and he went on to lead them at the 2007 World Cup in China.