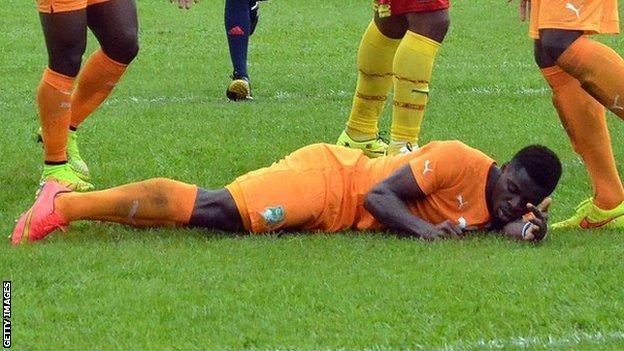 Ivory Coast defender Serge Aurier has been declared fine by doctors after he was knocked unconscious during the Africa Cup of Nations qualifier against Cameroon on Wednesday.

The 21-year-old was hurt in an aerial clash with Cameroon captain Stephane Mbia early in the second half of his side's 4-1 defeat in Yaounde.

He was stretchered off and appeared to be in a serious condition.

But Aurier recovered quickly and stayed at the stadium to watch the game.

"Treatment that was given in the Ahmadou Ahidjo stadium in Yaounde helped him to recover enough to go back to the Ivorian team bench," said the Ivory Coast Football Federation.

The federation added that Aurier suffered "shock from the force of the blow to his head but did not have any convulsions".