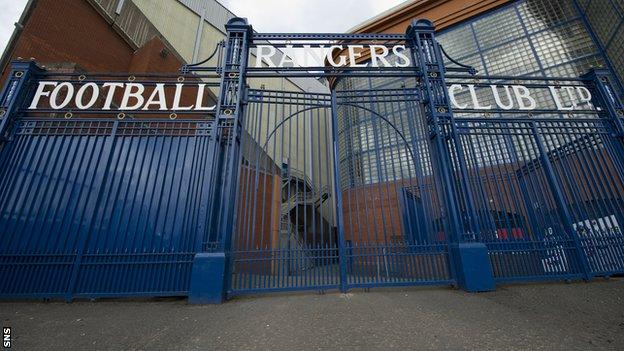 Rangers have so many horrors going on in the here and now they didn't need any old ones revisiting them.

The sight of Rizvi on the front page of the Daily Record on Wednesday, chuckling in the company of director Sandy Easdale, could scarcely have been any more chilling for the club's beleaguered support had Craig Whyte been snapped in the background jumping into a taxi with the contents of the Ibrox trophy room in a large sack.

Rizvi protests his innocence but the fact is that Interpol are on his case, and have been for some time.

He is wanted in Indonesia for alleged corruption, money laundering and various banking crimes that could carry a prison tariff of 15 years if he ever ventured back there and was found guilty.

He flits about the UK and Singapore, two countries where there is no extradition partnerships with Indonesia. In the weighty catalogue of characters that have made Rangers fans' blood boil over the last two-and-a-half years, Rizvi has his place.

He's maybe not among the A-list villains but, to the fans, his presence anywhere near Rangers' property is about as welcome a development as news of a testimonial game for Charles Green.

The story on Wednesday had it that Rizvi was some kind of middle man for a Malaysian big-hitter, a prospective purchaser of Rangers by the name of Datuk Faizoull Bin Ahmad, whose current involvement in football is as chairman of the Malaysian Super League club Felda United.

On Wednesday evening, Rangers sought to clarify matters. Bin Ahmad was not in town to discuss future investment in Rangers, said a statement from Ibrox. Rather, he was in Glasgow as part of a potential youth development initiative between Rangers and Felda United.

That's a 13,000-mile round trip from Felda's home on the west coast of Malaysia. For what, exactly?

We have to presume - and maybe it's an unwise presumption - that it's not Rangers who are hoping to learn about youth development from Felda, but the other way around. That said, is there a whole lot to learn?

Rangers' youth structure - or, to give it its more rightful name, Lewis Macleod - isn't exactly a model for any club, not even one as modest as Felda. Even most Rangers fans would surely agree with that, given the fact that the lack of development of young players at Murray Park is one of their great bugbears of recent years.

If these Malaysians really wanted to learn about developing youth, Auchenhowie wasn't exactly the most logical starting point.

With their supposed wealth, you might think that, er, Barcelona could have been a slightly better destination. Or Ajax. Or dozens of other places. Going to Rangers to learn about the art of nurturing young players and turning them into marketable first-teamers is like going to a haystack in search of a needle.

Scepticism is an essential tool when you're trying to analyse what is going on at Rangers. You hear so much and so little of it turns out to be true - or wholly true. There's bitter in-fighting and so many agendas that you'd go cross-eyed trying to track. The club is in a parlous state, coughing and wheezing towards its next bailout that will keep the lights on a little while longer, but with no long-term plan, no vision, no unity, no leadership.

Rizvi's cameo is the calamity in microcosm. Sandy Easdale said in December that he had nothing to do with Rizvi. He said he had no dealings with him, ever. In the wake of the picture, and the story, that placed them together at Ibrox and Murray Park (discussing youth development with the great explorer Bin Ahmad), Rangers stated that they had no "prior knowledge" that Rizvi was going to be part of Bin Ahmad's delegation.

Even if you take that at face value, it's odd. No prior knowledge? Fine. But when Rizvi turned up at the door at Rangers, what did the club do? Tell him to sling his hook? Make it abundantly clear to him that he's a discredited individual with strong links to Charles Green, Imran Ahmad and assorted alleged crimes in Indonesia?

It would appear not. Not even in their statement of Wednesday afternoon did Rangers seek to put distance between the club and Rizvi, as they knew the supporters would have wanted them to. Their statement just said that they hadn't expected him. Nothing else. Not a line about a man who is wanted by Interpol not being welcome at Rangers. Not a suggestion that he has no place at the club, even as a day-tripper, if, indeed, that's what he was.

Rangers fans could be forgiven for having a fatalistic attitude about the future of their club given the things that have gone on - and are continuing to go on.

The collective of supporters - the Union of Fans - issued a statement of their own on Wednesday night. It was an understandable, if plaintive, cry to the Rangers board to "take the necessary steps for the immediate removal of Sandy Easdale as a director of Rangers Football Club".

It went on to call on the key men at Ibrox to "act immediately to disassociate the PLC board from this further attempt to involve Rizvi in Rangers' affairs".

Rangers declined to comment on the fans' statement. They're silent on Rizvi and silent on those calling for reassurance that Rizvi is not part of their present or their future. Sometimes you can tell a lot by silence.