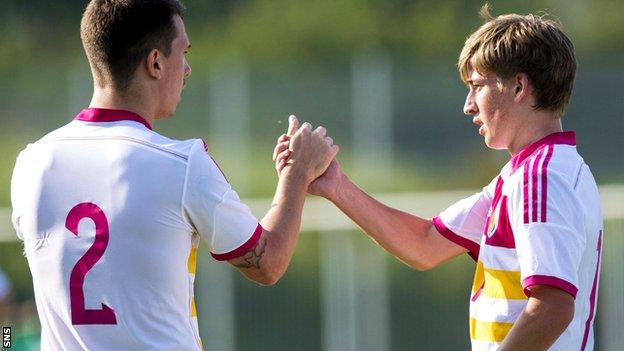 Scotland Under-21 boss Billy Stark hailed the impact of Sporting Lisbon youngster Ryan Gauld after he netted a double against Luxembourg.

The Portuguese giants' £3million summer signing from Dundee United netted either side of Rangers midfielder Lewis Macleod to record a 3-0 win.

Stark said after the game at the Stade Municipal de Differdange: "When you have a player of Gauld's quality it can make the difference.

"We've seen it with even the top teams,

"Look at Portugal on Sunday without Ronaldo. It hurts you when they're not there.

"Equally when they are there they can provide that moment that makes the game easier for you."

Gauld, who last week named in Sporting's Champions League squad fired home the opener after 31 minutes when the 18-year-old curled home after decent work by Stevie May.

Macleod added the second 10 minutes before half-time as he finished off a sweeping move that also involved Gauld and Aberdeen defender Ryan Jack.

Gauld's second came on 62 minutes as he swept home after more good play by Fraser, while he just missed out on a hat-trick with 10 minutes remaining when Luxembourg keeper Joe Frising did well to save his low shot.

But even the comfortable final win was not enough to see Scotland through to next year's finals in the Czech Republic after they failed to beat Slovakia on Friday.

The win takes them up to third spot in Group 3 but it will be the Netherlands who qualify directly to the tournament, with last week's opponents preparing for the play-offs.

"The second goal was a terrific build-up and finish for Lewis, who was excellent too," said Stark.

"Double-headers are difficult. The Slovakian game took a lot out of us so there's always that temptation to freshen things up but we decided to stick with the ones we played the other night.

"We should have done better with finishes but that was down to tired legs. We made them look ordinary by getting into a comfortable position.

"I'm heartened by the display and the way they went about things for the next campaign."