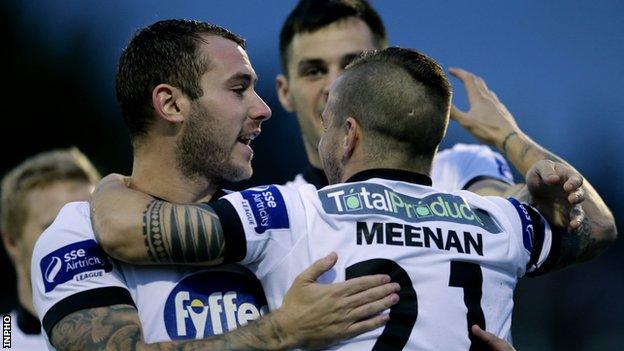 Darren Meenan's opener was timed at 12 seconds, with Curtis Byrne and Dane Massey adding goals before the break.

Dundalk's top scorer Patrick Hoban shot in the fourth before Brian Gartland's glancing header made it 5-0.

Derry were unhappy about the game being rearranged for four days before their FAI Cup quarter-final away to Drogheda.

Team boss Peter Hutton made it clear he was prioritising Friday's quarter-final by making seven changes, and resting a string of established first-teamers, for the trip to face the title favourites.

So, it was perhaps no surprise that after Dundalk had taken an early lead, the match lacked a competitive edge.

The opening goal came after Derry lost possession from the kick-off and, when Meenan was played in, he rifled a shot past stand-in keeper Ciaran Gallagher.

Derry's Josh Treacy did have a crack at goal but his low effort was comfortably collected by home keeper Peter Cherrie.

Dundalk, on course for their first title since 1995, went 2-0 up in the 34th minute with Byrne guiding in his shot from Massey's delivery after the hosts had worked the ball down the left.

It was Massey who made it 3-0 five minutes later with a thumping free-kick which beat Gallagher at his near post.

Things did not get any better for the Candystripes after the interval as Dundalk bagged a couple of quick goals.

Top scorer Hoban shot in his 18th goal of the season in the 54th minute and that was quickly followed by Dundalk's fifth, a glancing header by unmarked former Portadown defender Gartland.

The easy win moves Stephen Kenny's side six points clear at the top of the Premier Division although second-placed Cork City have a game in hand.