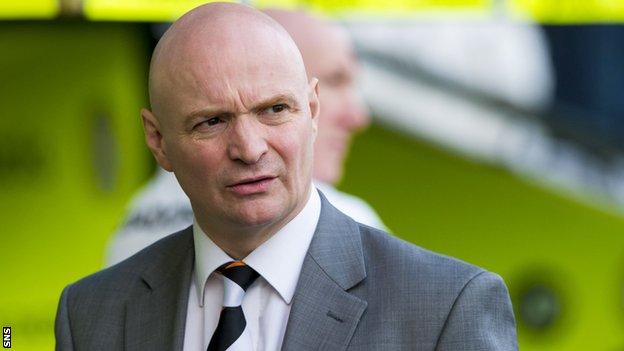 Dundee United chairman Stephen Thompson has revealed he recently rejected an approach from an investor interested in buying the Tannadice club.

Thompson explained he was approached earlier this year to establish whether the club was for sale.

United recently cleared their outstanding bank loans and have raised £5m from the sales of Ryan Gauld and Andrew Robertson.

"I was approached by a third party on behalf of a potential investor in England, who wanted to know whether I was interested in selling the club.

"I told them that the club was not for sale. We have worked too hard to get us to where we are to sell up now.

"We're free of debt from the bank. We own Tannadice Park and the Gussie Park training facility across the road from the ground and we are about to redevelop that with a new European two-star artificial surface.

"The bank is off our back now. They have no say in who we sell and they do not take a cut of any of the players we sell."

Last term, in Jackie McNamara's first full season in charge, Dundee United finished fourth in the Scottish Premiership and reached the final of the Scottish Cup.

"The fans have bought into what Jackie is doing with the team and the style of football we play," added Thompson.

"Our season book sales are our highest ever and we are working on another of couple of big things at the club for the future.