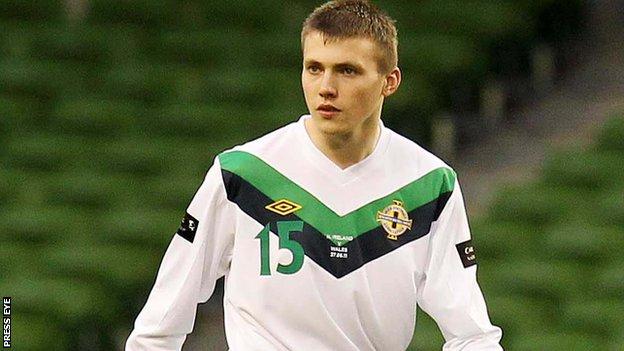 Stuart Dallas and Ryan McLaughlin have withdrawn from the Northern Ireland squad for the European Championship qualifier against Hungary on Sunday.

Brentford winger Dallas has pulled out with a leg injury while Liverpool defender McLaughlin is also injured.

"Gutted I had to pull out of the squad - injuries always comes at the worst time," said McLaughlin on Twitter.

Preston North End's Andy Little was drafted into the squad on Tuesday as a replacement for Dallas.

Former Rangers striker Little has yet to score for Northern Ireland since making his debut in 2009.

Little, who has made nine international appearances, moved from Ibrox to Preston in the summer.

The 25-year-old scored 38 goals in 87 games during his eight seasons with Rangers.

Former Crusaders player Dallas was on course for a second international cap, three years after his debut against Wales in the Nations Cup.

Dallas signed a new three-year contract with the Bees in June after helping the club secure promotion from League One.

The 23-year-old was a star player for Irish League side Crusaders before earning a move into professional football with the Bees in 2012.