Falcao had been linked during the summer with a move away from the French Ligue 1 side, whom he joined for £50m in May 2013.

The 28-year-old scored 11 goals in 20 league appearances for Monaco, and two in three games this season. 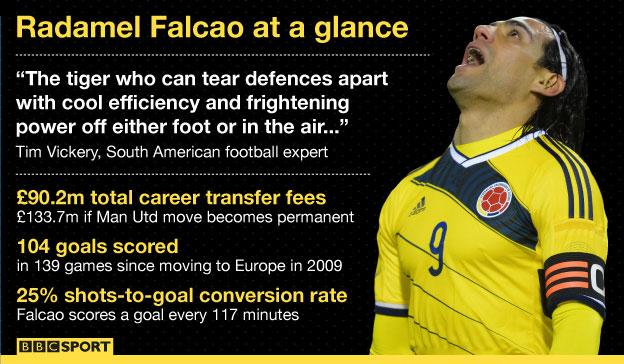 Falcao was United's second deadline-day arrival after the £13.8m signing of Daley Blind from Ajax.

The versatile Netherlands international, 24, has signed a four-year deal with United.

Falcao's move, meanwhile, includes an option for United to buy him for £43.5m at the end of the loan spell.

The player will earn approximately £265,000-a-week, while it is not thought Monaco are paying part of his wages.

The striker told his new club's website: "Manchester United is the biggest club in the world and is clearly determined to get back to the top.

"I am looking forward to working with Louis van Gaal and contributing to the team's success at this very exciting period in the club's history."

United, like most of Europe's top clubs, had been made aware of Falcao's availability over the past 48 hours.

Premier League champions Manchester City opted against pursuing a deal as they could not make space in their squad for the Colombian.

Van Gaal said: "When a player of this calibre becomes available, it is an opportunity not to be missed."

Falcao had also been linked with Arsenal, as well as Italian champions Juventus and Spanish side Real Madrid.

Rumours of a move to European champions Real gathered pace on Saturday when a comment on his official Twitter account, which was later deleted, read: "Dream come true #halamadrid."

In a later post Falcao indicated the first tweet was fake, saying: "I have to refute a story about a tweet I have not done and that is a photo montage."

United have also sold midfielder Shinji Kagawa, 25, to Borussia Dortmund for an undisclosed fee as Van Gaal reshapes his squad.

Speculation over Falcao's future grew when he was dropped from Monaco's squad shortly before Saturday's draw against Lille, after being expected to start.

Falcao made three appearances in Ligue 1 this season after returning from anterior cruciate ligament damage he sustained in January, which kept him out of this summer's World Cup.

He previously played for Portuguese side Porto and Spanish club Atletico Madrid, where he scored 35 goals in 46 league games.

United have made a poor start to the Premier League season, collecting two points from three games, and scoring only twice.