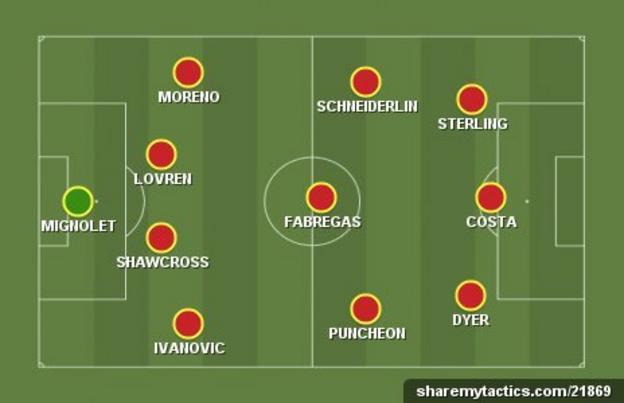 Chelsea have fired a warning to the rest of the Premier League after going top with a thrilling 6-3 victory at Everton on Saturday.

The only team keeping pace with them after three matches are Swansea, who maintained their 100% record by beating West Bromwich Albion.

I was at White Hart Lane to see Liverpool return to form by brushing aside Tottenham 3-0 - the Reds move level on points with Manchester City, who were surprisingly beaten at home by Stoke.

Elsewhere, Manchester United and Arsenal were held to draws, while Crystal Palace earned a late point at Newcastle, and there were wins for Aston Villa, QPR and Southampton.

Take a look at my team of the week and see if you agree with my choices.

The Liverpool goalkeeper did not have to perform heroics against Spurs, thanks largely to an immense team performance in what was a Brendan Rodgers masterclass. But the Belgium keeper looked commanding whenever called upon.

Ivanovic often finds himself up the pitch in open play but now he is scoring goals with his feet and not just his head - hitting the net in an impressive Chelsea victory at Goodison Park. In the most exciting game of the weekend, the right-back showed he is fast becoming Chelsea's new leader.

For as long as I can remember, Stoke fans have loved their centre-backs to be hard-working, no-frills and extremely competitive. Shawcross displayed all of those elements in a superb defensive performance to help his side to a 1-0 victory at Manchester City.

Although Martin Skrtel and Kolo Toure were out of the picture against Spurs, Liverpool never looked as if they were missing the experience of either player. Lovren partnered Mamadou Sakho and marshalled a new-look back four extremely well.

Full-back Moreno played his part in a comprehensive Liverpool victory over Spurs at White Hart Lane. The Spanish defender seemed to get more confident the longer the game went on - and his goal capped an impressive performance.

Fabregas seemed to be involved in every Chelsea move against Everton. It was a match where, if you blinked, you were likely to miss a moment of magic from him, Nemanja Matic, Ramires or Eden Hazard, all of whom helped tear the home side to shreds. But be under no illusion, it was Fabregas who was the mastermind.

I'm not sure what surprised me the most: Neil Warnock's return to Crystal Palace or the fact that Puncheon was selected in the manager's first game back. We all know that both men have had their differences but they seemed to put those to one side for the benefit of their club. Between them, they inspired a tremendous team performance in a 3-3 draw against a very dangerous Newcastle United.

Two beautifully-taken goals and a performance to match from Schneiderlin helped Southampton to a 3-1 victory at West Ham. I haven't given Ronald Koeman and his boys much hope this season after the sale of half of the team. But against the Hammers, there were signs that the Dutchman is assembling a new side. The Saints rode their luck, but they got the points.

This young man isn't just playing some lovely football at the moment, he's also scoring some fabulous goals. The diminutive Dyer's finish for his first goal in the 3-0 win over West Brom was exquisite. His form, along with that of Wayne Routledge, is making a massive difference for Garry Monk's side. For Swansea, the best things seem to come in small packages at the moment.

I never thought Chelsea would replace Didier Drogba so effectively, but they have. What a performance it was by Costa against an Everton side who were in no mood to roll over. The Spaniard stood up to everything the home side threw at him and remained resolute throughout. It is the second time he has made my team of the week. The way he's playing, he could be a permanent fixture.

I was at White Hart Lane to see this youngster take Tottenham apart. The decision to play him at the top of a diamond was a masterstroke by Brendan Rodgers, and Spurs never came to terms with it. What impressed me was Sterling's overall contribution to the team and the way he linked with Mario Balotelli and Daniel Sturridge. If those players continue to work well together, then Liverpool are in for another exciting season.