Ruthless, hard-working and able to wind up the opposition - new Chelsea striker Diego Costa is turning out to be what you might perceive as being Blues boss Jose Mourinho's perfect kind of player.

The £32m summer signing from Atletico Madrid scored twice in Saturday's thrilling 6-3 win over Everton and managed to annoy the Toffees players and their boss Roberto Martinez in the process.

Costa's goal tally stands at four in his first three Premier League games, which is some start for any striker at a new club in a new country.

To use an illustrious and similarly expensive example, Chelsea legend and current team-mate Didier Drogba took 12 league matches of his first season to do the same after joining from Marseille for £24m in 2004.

Fernando Torres - a then British record acquisition when he joined from Liverpool for £50m in 2011 - took 39 league matches to score four times.

A fast start for much-changed Chelsea

Costa has scored with his first shot in each of his games so far but, aside from the quality of his finishing, the speed with which the 25-year-old Brazil-born Spain international has adjusted to English football is the most impressive aspect.

Chelsea's fans have taken to him just as quickly, chanting his name throughout Saturday's game.

After wins over newly-promoted Burnley and Leicester, the trip to face Everton - who beat Chelsea at the same stage of last season - was viewed as their first serious test of the new season and they passed it in some style.

A lot has changed about Mourinho's team in the last 12 months but the attack, thanks to Costa, is where the most noticeable improvement has been made.

Against Everton, Costa scored in the first minute and the last, but offered plenty more in between. Everything his manager could ask for, in fact.

"It was a fantastic performance in every way," said Mourinho.

"He recovered the ball, he held the ball and he was aggressive. He was one-on-one [with Everton goalkeeper Tim Howard] three times and scored two goals. With the other chance, Howard made a good save."

The statistics give a pretty good indication of how poor Chelsea's strikers were last season - Costa already only needs one more to match the five goals recorded by both Fernando Torres and Demba Ba over the whole league campaign, and he is almost halfway to Eto'o's total of nine.

But against Everton we saw the other ways in which he compares favourably to his departed predecessors.

Costa showed the kind of confidence and sharpness so obviously lacking in £50m-man Torres, and the assured touch that always seemed beyond the enthusiastic but technically-limited Ba.

Eto'o demonstrated he is still a fine finisher by coming off the bench to score on his Everton debut. But, aside from his age, there are other reasons Mourinho allowed the 33-year-old to leave - he has never had the bustling physical presence that Costa possesses, or shown the same willingness to track back.

"It was not just Costa's attacking play that was impressive but also his defensive play," former Toffees defender and coach Phil Neville said on Match of the Day. "Every time there was a gap to fill he was back there making challenges. It shows what a team player he is."

The latter is the characteristic Mourinho values more than any other.

As well as scoring twice against Everton, Costa also picked up another booking to go with his harsh caution for diving against Burnley.

He was also the subject of a difference of opinion between the two managers. Mourinho argued that Everton's players had "tried to create problems" for Costa, but Toffees boss Roberto Martinez criticised the striker's propensity to go to ground.

The Chelsea manager said: "He has two yellow cards - one against Burnley when he did not simulate and it was a clear penalty, and one in this game where everyone was chasing to get him into trouble."

Did Mourinho have a point? "Some of the Everton lads were trying to wind him up," said BBC pundit Danny Murphy on Match of the Day. "They were giving him little nudges in the back. 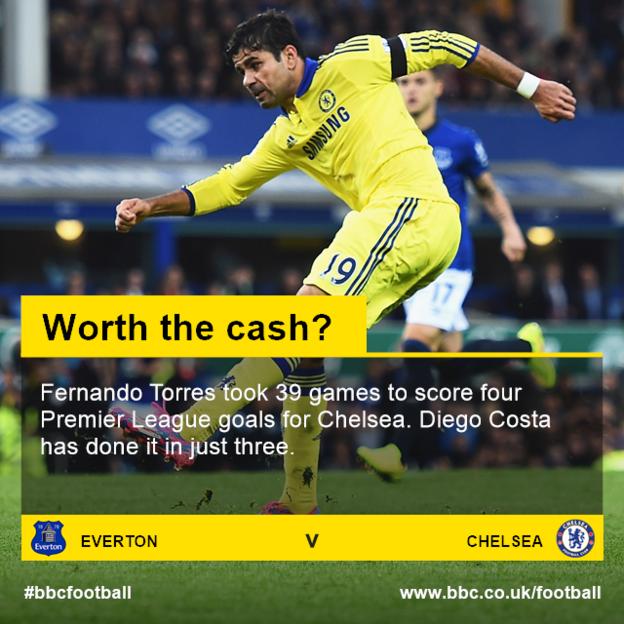 "But he remained calm and it is not the most sensible thing to do to upset this player because he is a wonderful talent."

Martinez, meanwhile, alluded to how Costa had irked Everton's players with the ease that he fell under certain challenges, and the Goodison manager made it obvious how much his players were angered by the manner in which he taunted Seamus Coleman after his own-goal.

"I don't mind that," added Murphy. "He gives Coleman a bit of banter, a bit of a taste of his own medicine. Tim Howard went after him but he stayed calm and did not react. Jose kept him on and why? Because he gives him quality."

Creating conflict is nothing new for Costa, who relishes a physical battle and often seemed to enjoy making enemies during his time in Spain.

His current manager has been known to do the same, so he is unlikely to reprimand his striker too much, if at all, for his actions.

The perfect fit for Mourinho's formation

Some pundits saw this sort of success coming when Chelsea signed Costa but there were also some doubters.

A poor World Cup, albeit while recovering from injury, impressed no-one, while his prolific season for Atletico Madrid - 36 goals in 52 games in 2013-14 - was exactly that. Go back any further and his figures are far less impressive.

They don't seem to matter much now, though. It is still early days, but the signs are Mourinho has got the perfect fit in terms of the player he was looking for to lead the frontline in his favoured 4-2-3-1 formation.

Along with fellow new arrival Cesc Fabregas, Costa gives Mourinho more quality and more options in terms of how his team can play.

Question marks will remain over his character but, after just three games, we have already seen how difficult he is to stop when he is fully fit and in form.

Martinez was referring to Costa's attitude when he talked after Saturday's game about how the player will have to learn and adapt to the ethics and culture of Premier League.

The worrying thing for Chelsea's title rivals is that he has already settled in in every other way.