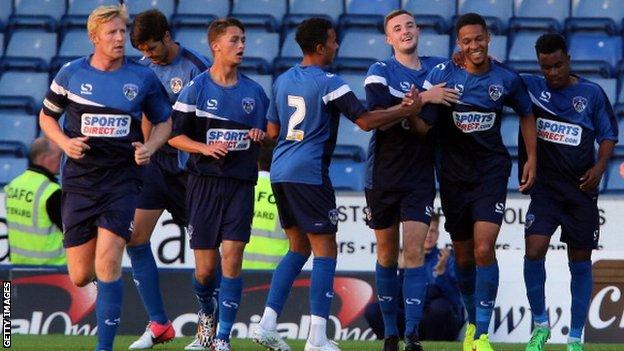 Fleetwood's unbeaten start to life in League One came to an end after defeat at north-west rivals Oldham Athletic.

The hosts dominated the first half but efforts from Danny Philliskirk and Jonathan Forte both missed the target.

They deservedly took the lead after Steven Schumacher brought down Philliskirk in the box and Forte stepped up to slot away the penalty.

The visitors improved after the break but Gareth Evans's curler from the edge of the box was their best attempt.

After tasting defeat for the first time in the league this season Fleetwood drop to third while Oldham's second consecutive league win moves them up to 11th.

The hosts started well and enjoyed the majority of possession with Forte having the best of the early chances for the Latics when he scuffed his effort from eight yards.

Philliskirk then missed the target after Nathan Pond had given the ball away.

The visitors began to grow into the game as Stephen Dobbie hit the side netting when well placed and Jamie Proctor forced a good save from Paul Rachubka.

But in stoppage time at the end of the first half Schumacher saw an effort saved at one end before he chased back the resulting Oldham counter-attack and tripped Philliskirk in the box.

Despite the Fleetwood midfielder's protest, top-scorer Forte fired the penalty under Chris Maxwell to open the scoring for the hosts and claim his fifth league goal of the season.

The second half began as the first half ended with Oldham on top as debutant Dominic Poleon forced a good save from Maxwell.

The Cod Army improved as the half wore on and Evans's curled effort from just outside the box had Rachubka scrambling, but the hosts held on for a deserved win.

"I'm a very happy man. It was a fantastic week's effort by the boys.

"I knew today was going to be really tough but I couldn't be more happy with my team today."