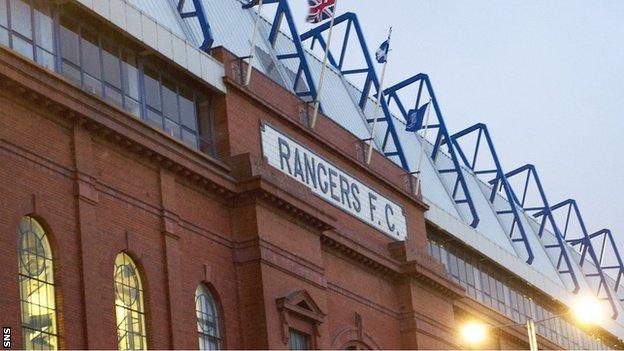 The stark reality of the financial situation at Ibrox has now been laid bare.

Rangers International Football Club requires an injection of money to pay bills and meet working capital needs, just to make it beyond the annual general meeting planned for October.

The announcement to the Stock Exchange about an contained warnings about the consequences of failing to generate these additional funds. Rangers fans were alarmed at the inference that the failure to raise £4m will leave RIFC in danger of administration.

That information had to be relayed to the Stock Exchange, but the situation is less clear-cut. As the statement also points out, emergency funding may or may not be available. It is, at least in the sense that the former Rangers director Dave King has continually made it clear that he wants to invest £30m in the club.

Power and finance are the two driving factors at Ibrox, though, and they are both linked. King wants to invest, but some want to keep him out. King's investment, given the scale of the funding required since Rangers needs significant amounts of money spent on the football infrastructure, as well as the maintenance of Ibrox and Murray Park, would lead to him taking control.

A source at Rangers revealed that the board had "held discussions with Dave King, but the content of those discussions will remain confidential".

The open offer of shares is not being underwritten, but it could have been by a shareholder or a non-shareholder. Rangers made an approach to King, and the South African-based businessman requested basic and up-to-date financial information. This was not granted and the discussion ended.

In the event of the open offer failing, King - or anybody else so inclined - could offer emergency funding. King's stance is that Rangers needs more than a financial sticking plaster, which is all that this open offer is providing. Even the chief executive, Graham Wallace, said in his 120-day business review that up to £30m will be required to restore Rangers to its former status.

Sources at Ibrox have stressed their confidence that at least 15m of the more than 19m shares being made available will be taken up by existing shareholders. Others believe that the majority of the institutional and leading shareholders will not put more money in. If fewer than 15m shares are taken up, then the offer will fail. At that stage, RIFC would need emergency funding.

Into this mix, the name of Mike Ashley continues to swirl. He currently holds a little less than 5% of the RIFC shares, and is limited - by agreement with the Scottish Football Association - to 9.9%. If Ashley wants to take a higher stake, he needs the approval of the SFA board.

Many Rangers fans, though, are concerned about the owner of Newcastle United becoming a more influential figure at Ibrox, where he already has a commercial agreement through Sports Direct. Should the two clubs ever qualify for the same European competition while he holds controlling stakes in both, one could not compete, given Uefa's rules on dual ownership.

"The board has tried and failed to convince most shareholders of their plans for the club," said the Union of Fans - a coalition of supporters groups - in a statement. "They apparently remain willing to allow Mike Ashley to significantly raise his stake in the club despite not having established whether this will fall foul of either the SFA or Uefa.

"Ask a Newcastle fan about the effects of Mike Ashley controlling their football club. Will this board deliver Rangers into the hands of those who care about it or to Mike Ashley, who will run it for his own benefit? We do not want Mike Ashley calling the shots at Rangers and we would hope the SFA would take a dim view of any attempt by the board to deliver the club to him, given the clear dual ownership issue.

"Graham Wallace and the other board members have known for at least nine months that significant levels of investment were required not only to see out the current season but also to invest properly in the club.

"They have also been well aware that this level of investment would not be raised from current shareholders and that only those with a genuine love for the club were willing to put such sums in.

"They now hang the threat of a second administration over the heads of fans and shareholders when they remain fully aware that funding can be brought in from outside.

"For the avoidance of doubt, there can be absolutely no threat of administration. A £30m funding package has been available for at least the past seven months and remains available.

"Graham Wallace has not even clarified if he is receiving the 100% bonus that the board has discretion to give him."

Trust has broken down between the fans and the board, and the shareholders who have an influence on the directors. That has led to a 15,000 drop in season ticket renewals, a shortfall that the open offer of shares is being used to address.

Yet the fundamental financial instability of Rangers is long-standing. It has not been caused by fans not being season tickets, merely exacerbated by that.

The current shareholder base does not appear to have the intention or the means to fund the full rebuilding of Rangers. This is the impasse that Wallace has been trying to overcome. His relationship with Sandy Easdale, the shareholder who held the proxy for up to 26% of shareholders at last year's AGM, is strained at best. Although both met Ashley earlier this week.

Easdale and George Letham, a Rangers fan and shareholder, loaned the club £500,000 and £1m respectively last February. Both were due to be paid back when those funds were in the Rangers bank account. Neither has been, and while a source at Ibrox insisted that both are "comfortable" with the assurance that they will be paid back next month, the 1 September deadline for repayment looks almost certain to be missed.

This is the reality at Rangers. Money is running out. New funds are required, and different factions want it to come from different sources. Mike Ashley? Dave King? In the meantime, alarm grows amongst the fans.