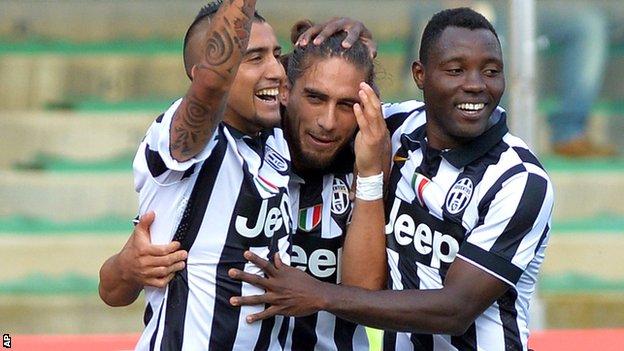 Juventus started their bid to win a fourth consecutive Serie A title with a comfortable 1-0 win at Chievo on the opening day of the season.

Martin Caceres headed in off Chievo defender Cristiano Biraghi early on in what could be credited as an own goal.

Gianluigi Buffon's diving save denied the Argentine, whose clear opening was by far Chievo's best chance in a game that saw them on the back foot throughout.

Juventus amassed a record 102 points last season under Conte, who has become Italy manager since ending his trophy-laden spell in Turin.

Allegri's league success with AC Milan in 2011 makes him the last manager to win the Italian title before Conte oversaw three successive victories, but the appointment of the 47-year-old was seen as a surprise by many in the Italian media.

He has strengthened his options this summer with five arrivals including Patrice Evra from Manchester United - a substitute in Verona.

Evra watched his new side exude the dominance of last season as they struck the woodwork three times in a first half where only Caceres' bundled effort separated the sides.

Arturo Vidal - consistently linked with a move to Manchester United - saw an effort cleared off the line and headed against the post from the resulting corner, before Carlos Tevez saw his volley hit the underside of the cross bar.

Caceres had not scored for Juventus since October 2012 but went close again with a looping header against the bar and smashed over from six yards on 70 minutes as Allegri's side wasted chances.

Summer signing from Paris St-Germain Kingsley Coman, 18, impressed on his debut and went close in each half from long range before his replacement Fernando Llorente's header forced a smart Francesco Bardi save.

The goalkeeper's heroics were matched at the other end late on when Buffon - starting his 14th season with Juve - saved from Lopez, who should have given Chievo an opening-day point.