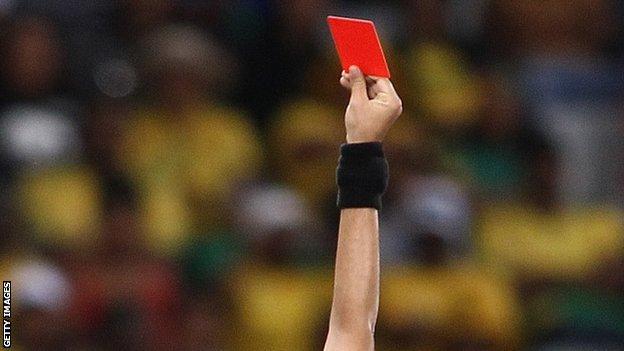 Nigeria's football championship has been suspended indefinitely because of a referees' strike in protest at a leadership crisis in the game.

Officials have taken action following a controversial Nigerian Football Federation 'election' on Tuesday, which has split the governing body.

The Nigerian Referees Association (NRA) has withdrawn its members from matches "until sanity is restored".

League officials say it is now "impossible for us to organise games".

League Management Committee official Salihu Abubakar said clubs and their sponsorship partners have been informed and teams have been directed not to proceed to venues of their scheduled games until further notice.

"We are already running a tight fixture schedule and are hoping that this crisis is resolved soon so the season can be concluded in time for our clubs to prepare for continental registration and participation", the LMC said in a statement.

The NRA's directive, contained in a circular signed by the body's secretary general Moroof Oyekunle Oluwa, also applies to the second-tier National League, Nigerian FA Cup and the women's leagues.

The Nigeria players' union and top club managers have joined the boycott of the Nigeria league.

However, the NFF insists matches will be played this weekend.

"The [strike] is totally untrue," said newly-elected NFF president Chris Giwa, whose appointment has been rejected by some members.

"If the LMC received a notice from the Nigeria Referees Association about purported withdrawal of referees, the LMC should have brought this to the notice of the NFF and not to take a decision to suspend the League on its own.

"As the owners of the League, the Nigeria Football Federation is hereby making it clear that Premier League matches are not being suspended. Matches scheduled for this weekend will definitely take place," Giwa added.

On Friday, the country's National Assembly - comprised of the Senate and the House of Representatives - summoned all parties in the NFF to a meeting to resolve the crisis plaguing Nigeria football.