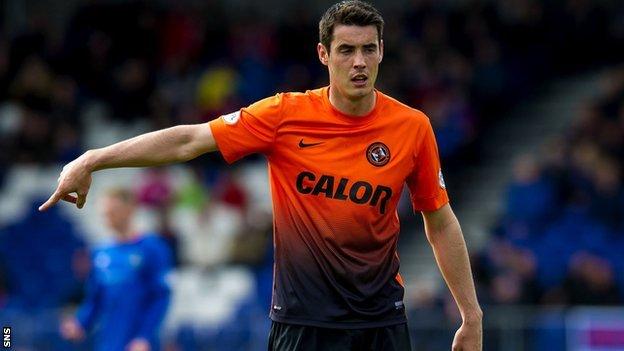 St Johnstone have signed striker Brian Graham on loan from Dundee United for the rest of the season.

The 26-year-old moved to Tannadice from Raith Rovers in May 2013 but struggled to pin down a starting place.

Most of his appearances for United came as a substitute and he netted seven goals for Jackie McNamara's side.

"He will get some good opportunities here," said St Johnstone boss Tommy Wright. "He has a physical presence and his movement is good."

Graham scored 38 goals over two campaigns at Raith Rovers but was frustrated at his limited time on the pitch at United.

"I thought it was right to go," he explained. "I was scoring goals for the club but it wasn't to be.

"I scored seven goals last season and I hardly played any minutes. I did well pre-season, I scored four goals in six games which was a good ratio - and if you add the minutes up it only adds up to three full games.

"I was looking forward to kicking on this season. But I never even got on the pitch in the first three games."

Graham goes straight into Wright's squad for the Premiership clash with Motherwell at Fir Park on Saturday.

"I think he is someone who is first and foremost hungry," added the Saints boss. "He has scored at all levels and really keen to come.

"He wants more opportunities to prove himself at this level and score goals.

"He can play in a two alongside Steven MacLean and can play on his own so he fits what we are looking for."

Saints have been looking for a new striker following the sale of Stevie May to Sheffield Wednesday.