Wayne Rooney celebrated his appointment as England captain with the winner against Norway on a night when fans turned their back on the team following their dismal World Cup exit.

Only 40,181 turned out at Wembley for England's first game since they were eliminated after two group-stage defeats by Italy and Uruguay in Brazil.

Rooney's penalty at least enabled manager Roy Hodgson to enjoy the taste of victory after a winless summer in South America - but the lowest turn-out for an England international at the new Wembley underlined the extent to which England have lost the public's imagination.

Norway are hardly the most glamorous of opponents, but on a balmy night such a meagre attendance is a reflection on the apathy that currently surrounds the England team after the World Cup.

This game was designed as preparation for Monday's testing Euro 2016 qualifier against Switzerland in Basel and it was an uninspiring affair played out in front of vast swathes of empty seats, with Wembley's top tier deserted and the one below hardly populated.

If there were positives to take from England's display it was the vibrant performance from Liverpool's young attacker Raheem Sterling and Rooney's goal, which was his 41st for his country, taking him to fourth in the all-time listings and only eight behind record-holder Sir Bobby Charlton.

Liverpool team-mates Sterling and Daniel Sturridge were lively in partnership in the first half but Norway were given some encouragement when they put England under pressure after the break, keeper Joe Hart saving brilliantly from Joshua King, who also almost took advantage of a slip by Gary Cahill. 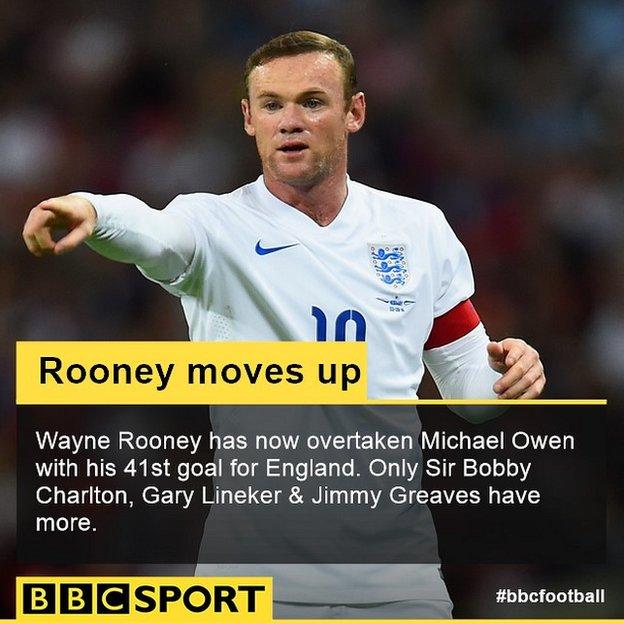 Cahill provided a late worry for Hodgson when he limped off after a knock and had his ankle encased in ice.

Both were busy but in such an atmosphere, more akin to a testimonial than an England international, it seemed the players had trouble raising their own game.

Hodgson will have been satisfied by a solid performance at right-back from Everton's John Stones while Arsenal new boy Danny Welbeck, signed from Manchester United in a £16m deadline day deal, looked lively as a substitute.

Switzerland will provide a much sterner test, as they proved with their own performances in Brazil, and Hodgson will at least hope England's confidence has been bolstered by the victory, if not the performance in an almost surreal Wembley atmosphere.