How times have changed, and prices soared, since that landmark move, with Angel Di Maria's 2014 switch to Manchester United from Real Madrid costing nearly 60 times as much.

The reported fee of £59.7m is a new record paid by a British club, topping the £50m Chelsea forked out for Fernando Torres in 2011.

It takes total spending by Premier League clubs in a transfer window past £700m for the first time.

Here we look at the rising sums down the years, including the £1,000 striker called Common and the forward who was injured when he signed for £35m and is on the sidelines again now. 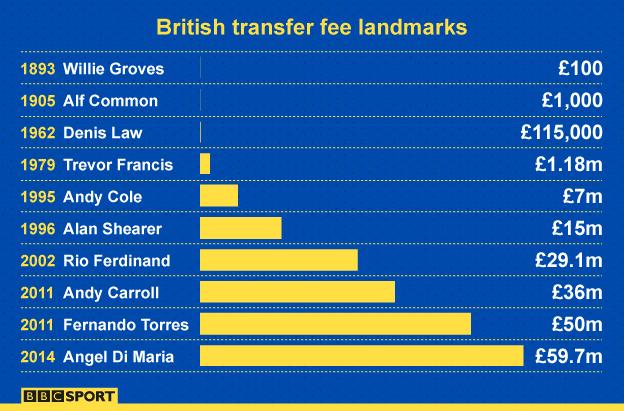 Scot 'Darlin' Willie Groves was the first £100 player, transferring from West Brom to Aston Villa in 1893.

While the sums may change, some of the transfer tactics do not, with Villa fined £25 over allegations of tapping up players.

A former Celtic and Hibernian star, Groves also had a key role in helping West Brom win the FA Cup a year before his move, and landed the league title with Villa in 1894.

But despite the transfer fee - which equates to about £11,000 in today's money when inflation is taken into account - he died a pauper.

Groves retired from the game after developing tuberculosis and died in Edinburgh aged 39, 15 years after his landmark transfer.

The mark was soon passed, with Alf Common becoming the first footballer to move for a £1,000 fee.

Common joined Middlesbrough from local rivals Sunderland in 1905, and the forward helped his side stave off relegation to Division Two.

Transfer fees grew steadily throughout the 20th century but advanced significantly in the 1960s and 1970s as sides competed for trophies in Europe.

Denis Law attracted the first six-figure fee from a British club when he returned to England from Italian club Torino, with Manchester United paying £115,000.

He scored on his debut against West Brom in 1962 and racked up 237 goals in total with the Old Trafford outfit, trailing only Sir Bobby Charlton in United's list of all-time leading scorers. Law was just 12 short of Charlton's tally, despite playing 354 games fewer.

The transfer record was broken twice by one man - Allan Clarke went for £150,000 in a 1968 move from Fulham to Leicester, and then £165,000 the following year when transferring to Leeds United.

While the first £1m move in Britain happened in an age before 24-hour news channels and social media, there was a certain razzamatazz around Trevor Francis signing for Nottingham Forest from Birmingham City in 1979.

It was double the amount received by Liverpool when Kevin Keegan was sold to Hamburg two years earlier, but Clough seemed determined to ensure some of the focus was switched away from his star signing.

The mercurial manager turned up at a news conference in a bright red sports jacket and with a squash racket in his hand, as if to suggest his social life was far more important than a bit of football business.

More seven-figure transfers followed later in the year, with Steve Daley leaving Wolves for Manchester City while his former side bought Andy Gray from Villa.

In the 1980s, with a ban on English clubs competing in Europe after the Heysel Stadium disaster, top players such as Mark Hughes and Ian Rush were prepared to move abroad.

But the lifting of the ban, and the advent of the Premier League with increased television revenue, saw a new era of big spenders.

Striker Andy Cole dramatically joined Manchester United from Newcastle in January 1995 in a £7m cash-plus-player deal that saw Keith Gillespie head in the opposite direction.

Magpies boss Kevin Keegan came in for criticism from fans over the departure of a man who had scored 55 goals in 77 league games, and United snatched the league title from Newcastle in 1996.

But there were delirious scenes on Tyneside when Keegan signed Old Trafford target Alan Shearer from Blackburn for £15m.

"This signing is for the people of Newcastle. It just shows you the ambition of Newcastle United. We are the biggest thinking team in Europe now," said Keegan.

Shearer, scored 206 goals in 404 appearances during a 10-year playing stint until he retired in 2006, but the club never won the title.

"I loved being the world's most expensive player," Shearer told BBC Radio 5 live. "It gives you a pressure on you, there's no doubt about that. But it's a pressure I enjoyed.

"If someone is crazy enough to spend that type of money that's their problem. I thought it was an honour someone was prepared to pay that amount of money for me. Looking back £15m is a snip nowadays."

From Rio to Angel of the North West

As Gates crooned Anyone Of Us (Stupid Mistake), Sir Alex Ferguson was hoping he had done nothing of the sort, buying England defender Rio Ferdinand for £29.1m from Leeds, having shelled out £28.1m the previous year to Lazio for Argentine captain Juan Sebastian Veron.

Ferdinand clearly had the X Factor - his £18.5m move from West Ham to Leeds in November 2000 had made him the world's costliest defender - and he won six league titles, two League Cups, and a Champions League in his 12-year Manchester stint.

The £30m mark was broken by Chelsea for Andriy Shevchenko as Russian owner Roman Abramovich wielded his financial muscle.

It was a move that allowed the Anfield club to bring in new recruits - and they paid out £35m for Newcastle's Andy Carroll and £22.7m for Uruguay striker Luis Suarez.

The deals showed the profits and pitfalls of spending big - Torres has failed to fire so far at Chelsea while Carroll, who was out with a thigh injury when he signed for the Reds, is currently sidelined at West Ham, who bought him for a knockdown £15m at the start of 2013.

But Suarez was last season's Premier League top scorer, albeit he was subsequently handed the third ban of his career for biting an opponent. He is now at Barcelona following a deal worth between £65m and £75m.