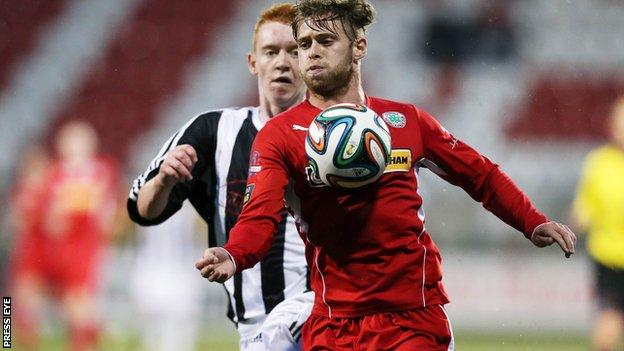 Knowles marked his return to the club after one season at Linfield with a goal in each half against the Championship Two side on Monday night.

There were also wins for Coleraine, Portadown and league leaders Ballymena.

A stunning strike by Davy McDaid, plus Knowles first goal and a Joe Gormley penalty had Cliftonville 3-0 ahead at half time.

McDaid and Knowles both scored again in the second half with Martin Murray also among the goalscorers.

Crusaders were stunned when Glebe Rangers took the lead through Karl Steele after three minutes at Seaview, but they recovered to coast to a convincing victory.

Rhys Marshall latched on to a Hamilton free kick to head Glenavon in front after 79 minutes and Andrew Hoey added a third goal in injury time.

Ian Parkhill scored his first goal for Coleraine as the Bannsiders defeated Larne 3-0 at The Showgrounds.

League leaders Ballymena defeated Newington 3-0, with Tony Kane, Matthew Tipton and Darren Boyce all on target while Ballinamallard enjoyed a comfortable 5-0 victory away to Ballymoney United.