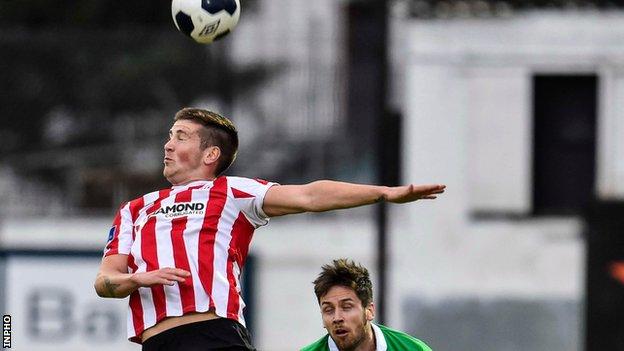 Derry City scored four goals against Limerick at Thomond Park on Monday night to end a run of three successive league defeats for Peter Hutton's side.

Patrick McEleney opened the scoring after 20 minutes and Michael Duffy made it 2-0 in the 34th minute, an advantage the Candystripes held at half time.

Ryan Curran added a fourth late on, his first goal of the season before making an expected loan move to Coleraine.

The Candystripes' hopes of securing fourth place and possible European football next season were all but ended after reverses at the hands of Shamrock Rovers, Cork City and Drogheda United.

However they were emphatic winners in Limerick, picking up only their third away league win of the season.

McEleney's goal came after a great passing move, finishing from just inside the penalty area for his eighth goal of the season on 20 minutes.

Limerick's defence was hesitant throughout and a mistake by Stephen Folan allowed McEleney to square the ball to Michael Duffy. His initial shot was well saved by Limerick goalkeeper Barry Ryan but he netted with the rebound as the home side failed to clear their lines.

Derry goalkeeper Gerard Doherty pulled off a superb one-handed save to deny Djilali before the interval to ensure his team's two-goal lead going into the half-time interval.

Lowry's fierce shot into the bottom corner put Derry 3-0 ahead after 64 minutes and Stephen Dooley's shot fizzed just wide soon after as the Candystripes piled on the pressure.

Substitute Ryan Curran added a fourth goal in the 86th minute in what was probably his last appearance for Derry City before his expected loan move to Coleraine. His right-footed shot was blocked by Patrick Nzuzi but Curran finished with his left to complete the rout.