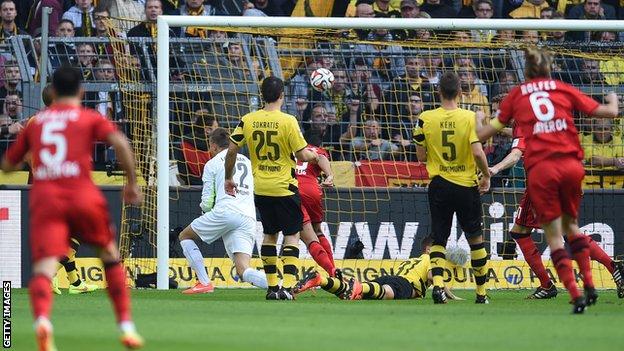 Three passes after kick-off, the 24-year-old midfielder received the ball on the edge of the Dortmund box before turning and sliding in from 15 yards.

It was two seconds quicker than the record held by three players, including Bayern Munich's Giovane Elber in 1998.

"I am really happy for Bellarabi," said Leverkusen sporting director Rudi Voeller. "This record is great for him. We did absolutely everything right in that first half and so did he."

Dortmund boss Jurgen Klopp reacted to Bellarabi's record-breaking goal with a disbelieving grin, but was not smiling at the final whistle as he angrily harangued the match officials.

In truth, Klopp could only blame his players for a deserved defeat which already leaves them three points adrift of arch-rivals Bayern Munich.

The under-strength hosts, who were missing several key players through injury, played at a pedestrian pace and were unable to cope with Leverkusen's high-tempo pressing.

Reigning champions Bayern started their title defence with a 2-1 success against Wolfsburg on Friday.