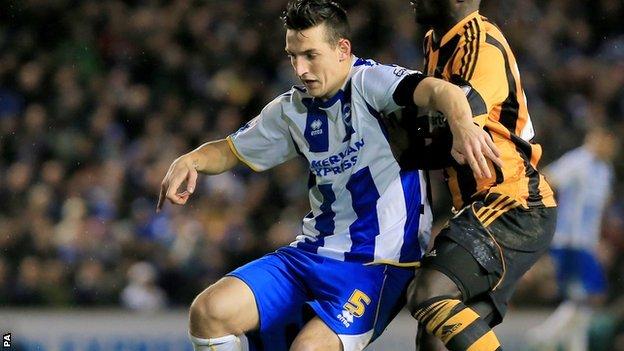 Igor Vetokele put the Addicks ahead when he slotted past David Stockdale after Yoni Buyens had played him in.

Dunk headed home Danny Holla's corner to level but Vetokele's neat finish off the inside of the post restored the visitors' lead.

The point extends the Seagulls' unbeaten run to three games while Charlton are yet to taste defeat in the Championship this season.

Brighton went behind for the second successive game as in-form Angolan forward Vetokele made the most of a fast break to put the visitors in front.

Sami Hyppia's men responded well and would have been level shortly after but Addicks keeper Stephen Henderson made a superb save to keep out Joao Teixeira's effort.

The hosts dominated possession but could not find an equaliser until Dunk rose to head home from 10 yards.

Against the run of play, Vetokele scored his fifth of the season with a well-placed finish to put the Addicks back in front.

With Brighton staring defeat in the face, Dunk completed his brace with just seconds to spare to share the spoils.

"The sky's the limit, but he needs to keep his feet on the ground and not get carried away.

"I see him as a promising young central defender who can play football. He's as good as I thought and, in the last games, he has shown that he's improving.

"He has all the attributes of a centre-back - he's good in the air, quite quick and can play football.

"He's got three goals already so it shows he's got that capability and he is also great from set pieces."

"We are five games unbeaten so credit to the players. We kept our shape, our game plan worked well and Brighton couldn't break our line.

"It's devastating to give it away like that. But if you get a point away from home against a good side you have to be pleased."