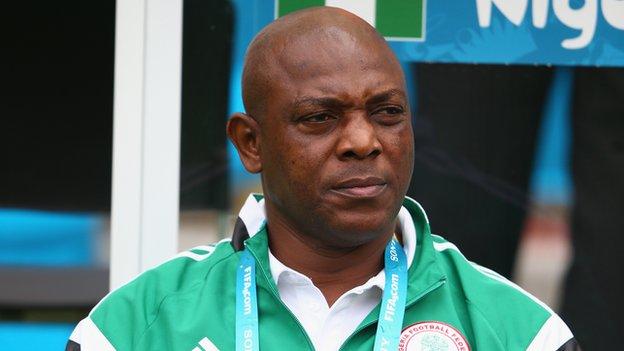 Stephen Keshi has appeared to rule himself out of a return as Nigeria coach after losing patience with the Nigeria Football Federation (NFF).

Keshi's contract expired on 30 June, shortly after he led Nigeria to the last 16 at the World Cup, and he had been negotiating a new deal.

He told BBC Sport: "Talks over a new contract shouldn't drag on. I can't wait any more - the NFF is not serious.

"I have moved on. I can only wish the country well for the future."

Talks had been ongoing since July but a series of delays caused by problems within the federation, including the sacking and the Fifa-ordered reinstatement of the governing body's president Aminu Maigari.

"There's a game in two weeks [Nations Cup qualifier against Congo] but no-one is thinking about it and at the same time they expect you to win," Kehsi continued.

"I understand the ongoing crisis facing the federation but the national team should not suffer from such at this crucial stage.

"Sadly, I also think attention is focused more on the upcoming NFF elections and the national team is simply not a priority."

The NFF officials are understood to have offered Keshi a new four-year deal and same $30,000-a-month salary he was paid in his first stint as manager, while the coach had asked for an increase.

Keshi says he has rejected offers from other African countries while the negotiations have been going on.

"I've had about seven countries approach me in the last two months but I kept them all away," he added.

"I love my country and I am aware of the dream our fans had of me taking this team to the next level.

"While acknowledging the efforts of some people involved in the negotiation, I think others probably have other important things to do."

Nigeria have already named a 23-man squad for their upcoming qualifiers against Congo on 6 September and South Africa four days later.

The defending champions will also face Sudan in Group A with the top two advancing to January's finals in Morocco.

Meanwhile, NFF officials say Fifa has endorsed their plan to hold a general assembly on 26 August to consider and approve a new roadmap for elections of the body's executive committee.

The assembly will be asked to postpone the elections that were also due to be held on Tuesday, following unresolved complaints raised by some candidates.